A few people have heard of revolutionary philosopher Thomas Paine.

Some have probably also heard of his pamphlet, 'Rights of Man', published on 16th March in 1791. Or perhaps even his other notable pamphlet, ' common sense' which advocated American independence from Great Britain.

But I doubt anyone knows that, in addition to his political work, he designed bridges...

In 1787, thirteen years after he'd emigrated to America from England, a single-arch iron bridge of Paine's design was built over the Schuylkill River in Philadelphia.

A decade later, in 1796, Paine got another of his bridges up over the River Wear in North-East England. This one became something of a prototype and, even though he was a dangerous revolutionary residing in republican France at the time, secured him a British patent.

All this engineering work could be seen as an outlier from the conventional image of Thomas Paine – bookish intellectual, pen in hand, flying from the American Congress to the French National Assembly, denouncing absolutism in philosophical prose.

Actually, I don't think so. The idea behind designing and building bridges is to make passable what seemed impassable at first glance, right? 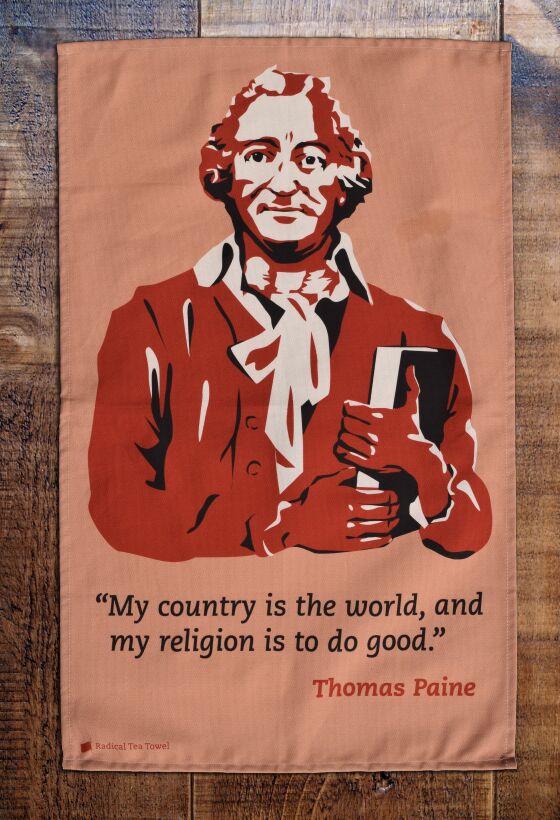 Building the bridges of the revolution

Paine was born in Norfolk, England. He was, in a conventional sense, an Englishman. And, as regards the American and then the French revolutions, Englishmen were being told by their rulers to oppose these causes on national grounds.

The Americans were traitors to England. The French were foreigners, intent on invading England and destroying what she (supposedly) held most dear... her (German) royal family.

Paine the Englishman, then, stood before a roaring river of jingoism. Inaccessible on the far bank was solidarity with the liberal, progressive causes advocated by Philadelphia and Paris.

As such, Paine did what he always did when faced with a river – he built a bridge over it.

But this time it was with a pen, rather than a drawing pencil. In 1791, while living in Paris, Paine wrote his 'Rights of Man'. It was a riposte to Edmund Burke's 'Reflections on the Revolution in France', which had condemned the overthrow of King Louis in a lengthy defence of reactionary values.

Incorporating much from Paine's earlier writings – not least 'Common Sense' (1776), which George Washington had read aloud to his soldiers before battle – the 'Rights of Man' denounced hereditary privilege and economic oppression.

Against them was called forth the right of every individual to life, liberty, and happiness. And all of this regardless of nationality.

Terrifying the conservative British government, 'Rights of Man' - with its progressive, internationalist message - sold nearly a million copies in England.

The British establishment was scared because Paine's work undermined their own narrative for the people that the French Revolution should be opposed because it was 'un-English'.

"The World is my country, all mankind are my brethren, and to do good is my religion."

And, if the British people did start to see things like this, perhaps they'd start waving tricolours of their own…

Thomas Paine led a life which was confusing and wrong to the nationalist eye.

He was born in England, but he travelled Europe raising money for the Americans' war effort against the British crown. He grew up in the land that belonged to that crown, but advised the French Republic on how best to invade the British Isles.

For the conservative nationalist, Paine was a traitor.

He wasn't, of course.


A solider of the global fight for freedom

For his entire life, Paine was steadfastly loyal to the world – loyal to the 'Rights of Man'. He travelled thousands of miles to fight for them, brushing shoulders with some other notable stars of our tea towels: Washington, William Wilberforce, Thomas Jefferson, Benjamin Franklin, and many others who were shaking up the status quo of the age.

He was, as one eulogist said, "a soldier in the army of freedom."

And if you're in need of a single-arch iron bridge, he could have helped you out with that as well.