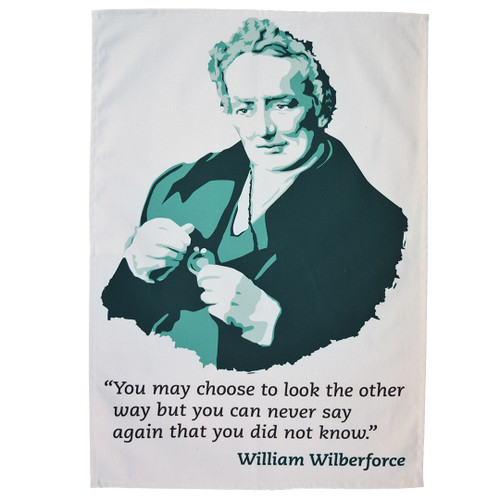 ‘You may choose to look the other way but you can never say again that you did not know.'

William Wilberforce was a British politician who headed the parliamentary campaign against the British slave trade. The trade had seen the forced migration and enslavement of millions of Africans, upon whose backs the foundations of the ‘developed’ Western world was built. Despite this prevalence of slavery, there were still those who recognised the inhumanity and campaigned for its abolition. Wilberforce was one of these individuals. He introduced his first bill to outlaw the transatlantic slave trade in 1789, but it was defeated. This did not deter him however – he raised the issue in Parliament again in 1790, then in 1791, and then for another sixteen successive years until he was successful, with the passage of the Slave Trade Act in 1807.

Although over 200 years have passed since the 1807 Act, modern slavery, in its many forms, continues to exist today. The quote on this tea towel is a reminder to keep standing up, keep fighting, and keep pushing for the freedom of all.