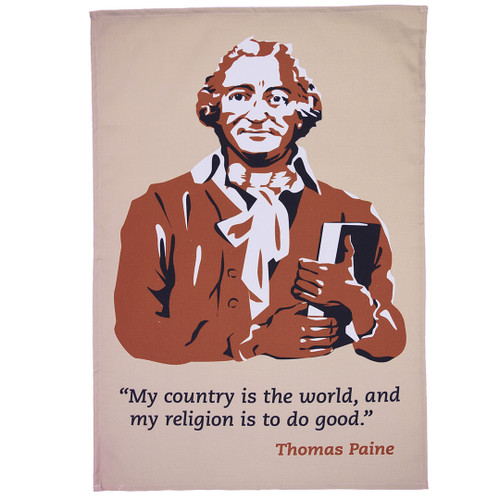 ‘My country is the world, and my religion to do good.’

Often considered one of the founding fathers of the US, Thomas Paine was a radical political writer who emigrated to America in 1774. Two years later, he published Common Sense, a demand for American independence, in which he wrote about the ‘birthday of a new world’ and the ‘power to begin the world over again.’ He returned to Europe in 1787, where – in response to Edmund Burke’s Reflections on the Revolution in France – he published his most famous work, The Rights of Man, which advocated the constitutional guarantee of the civil rights of individuals. Paine had to flee Britain as a result, finding refuge in France, where he was briefly elected to the French National Convention. However, after being imprisoned for opposing the execution of Louis XVI in 1793, he returned to America in 1802 on an invitation from Thomas Jefferson.

Paine was a radical social reformer, dreaming a grand vision for society: he was staunchly anti-slavery, and he was one of the first to advocate a world peace organization and social security for the poor and elderly. Today, the long lasting impact of his work can be seen, with his promotion of the concept of human rights influencing the American Constitution as well as the European Convention on Human Rights.