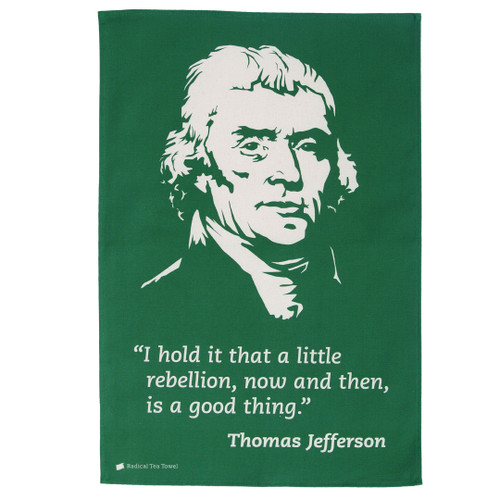 ‘I hold it that a little rebellion, now and then, is a good thing.’

That’s a sentiment we definitely agree with! Thomas Jefferson was a 'Founding Father' and third President of the United States, but perhaps his longest lasting legacy comes from his authorship of the Declaration of Independence. This document, penned in 1176, is now an influential statement on human rights, particularly its second line, ‘that all men are created equal, that they are endowed by their Creator with certain unalienable Rights, that among these are Life, Liberty and the pursuit of Happiness,’ which is perhaps now one of the best-known sentences in the English language. As well as influencing the US Constitution, the Declaration of Independence has since inspired many similar documents in other countries as well.

Jefferson supported these sentiments in his own politics too – he was an advocate of religious freedom, individual and states' rights, and opposed the expansion of federal powers including the Alien and Sedition Act. His stance on slavery was less clear – he was himself a slave owner his whole adult life, but in his first draft of the Declaration, he denounced the slave trade as an ‘execrable commerce’ and ‘assemblage of horrors’ and he signed the government's Act Prohibiting Importation of Slaves in 1807.