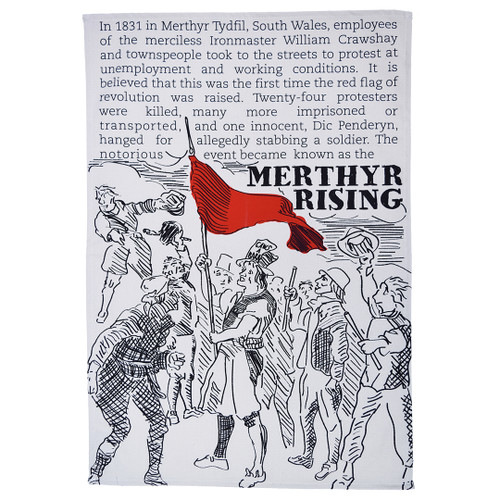 Our Merthyr Rising tea towel is based on contemporary cartoons from the time of the Merthyr Rising. The rebellion was the violent climax to many years of simmering unrest among the large working class population of  Merthyr Tydfil in South Wales and the surrounding area. In May 1831 the coal miners and others who worked for William Crawshay took to the streets of the town calling for reform, protesting against the lowering of their wages and general unemployment.

Gradually the protest spread to nearby industrial towns and villages and by the end of May the whole area was in rebellion. It is believed that for the first time the red flag of revolution was flown as a symbol of workers' revolt. By 7th June the authorities had regained control of the town through force with up to 24 of the protesters killed. Twenty-six people were arrested and put on trial for taking part in the revolt. Several were sentenced to prison, others to penal transportation to Australia. Richard Lewis (Dic Penderyn) was hanged in August for stabbing a soldier in the leg with a seized bayonet despite the people of Merthyr Tydfil being convinced of his innocence, and 11,000 signing a petition demanding his release.

The Merthyr Rising Festival, a cultural festival of music, arts, political discussion and ideas, is held annually in May on the anniversary of the events of 1831.