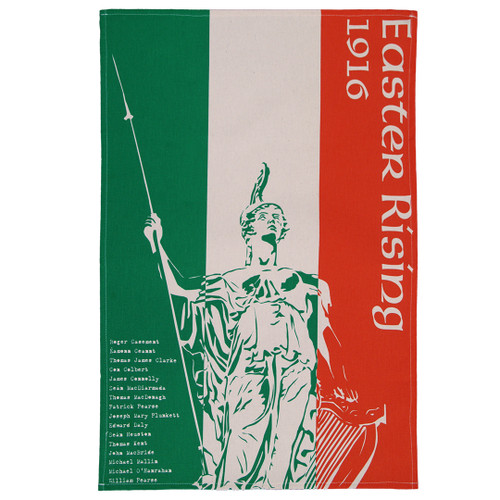 In 1800, Ireland lost its parliament in Dublin and began to be governed directly from Westminster. In 1916, the United Kingdom faced its greatest internal threat in 100 years: The Easter Rising.

Also known as the Easter Rebellion, this was an armed insurrection in Ireland during Easter Week, April 1916 where 1,500 armed Irish nationalist rebels seized control of Dublin and held the centre for six days. The leaders wanted to end British rule in Ireland and establish an independent Irish Republic, guaranteeing ‘religious and civil liberty equal rights and equal opportunities to all citizens.’

The rebels had the advantage of surprise, but this did not last: the authorities quickly regained their composure and the rebellion was mercilessly suppressed. The city centre was left in ruins. Then, the authorities began executing the rising’s leaders after closed court martials. This tea towel features the names of those executed, as well as the statue of Ireland atop the General Post Office which had been the rebellion headquarters.

Although the rising was crushed, the spirit was not. The rising exposed the oppressive nature of British rule and it transformed public opinion – within a year and a half republicanism had become the most important movement in Ireland. How fitting: The Easter Rising, a key moment for a resurrection.