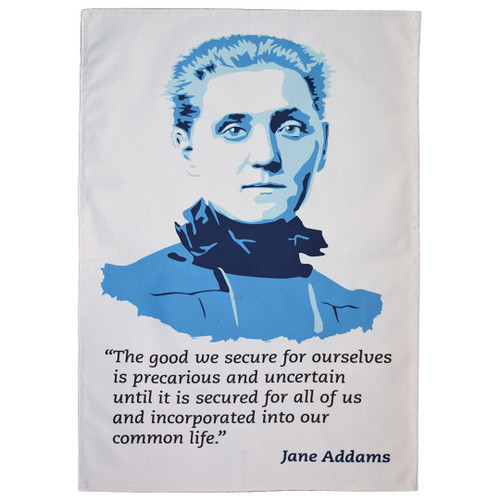 ‘Civilisation is a method of living, an attitude of equal respect for all men.’

Like many wealthy and privileged American women at the time, Jane Addams set out on a two-year tour of Europe in 1883; a rite of passage. Aged 23, she travelled the across the continent, spending several months in Dresden, Berlin, Paris, and London. Unlike others, however, Addams came back a transformed woman. She was appalled by the poverty and squalor she witnessed in her travels, and when she came back she fell into a deep depression, unable to accept the conventional lifestyle expected of a woman of her wealth and status.

Reading voraciously, writing extensively, and her dreams of helping those in need, gave her direction. In 1889, her and her partner, Ellen Starr, co-founded Hull House, a settlement house in Chicago. Addams’ social work there focused on education, employment, and empowerment for the city’s diverse immigrant community, providing daycare facilities for the children of working mothers and English language as well as citizenship classes. She also became a women’s suffrage campaigner, arguing that women needed to have a political voice so that they could bring their domestic expertise into the public sphere and assist with key areas of government, such as sanitation to schooling, as well as promoting pacifism. In 1920, she founded the American Civil Liberties Union, and in 1931, four years before her death, she was awarded the Nobel Peace Prize.

So, a pacifist, feminist, and social worker… that’s no plain Jane.