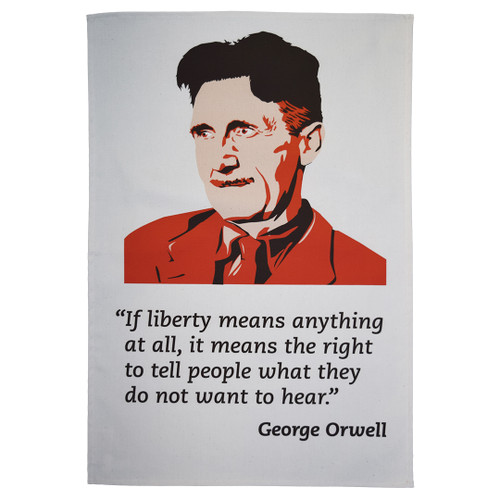 Skip to description
‘If liberty means anything, it means the right to tell people what they do not want to hear.’

This quote comes from the preface of a book by Eric Arthur Blair – an English author better known by most as George Orwell. In his lifetime, Orwell wrote six novels and hundreds of articles, the most celebrated being Nineteen Eighty-Four and Animal Farm. A democratic socialist, he was deeply opposed to totalitarianism and aware of social injustice, as reflected in his works. His writing remains as pertinent today as it did when he was alive: in 2017, shortly after the US presidential inauguration of Donald Trump, sales of Nineteen Eighty-Four rose dramatically, and it’s remained a best-seller since. The novel has been so influential since its publication that terms related to it have become long integrated into the English language. ‘Orwellian’ is now a universal shorthand for anything repressive or totalitarian; ‘Big Brother’ (the totalitarian ruler from the novel) has been the inspiration and title for a widely-known reality TV program for 20 years; and ‘Newspeak’…well, see the ongoing attempts to spread ‘alternative facts’.

Refuse to be a sheep (or any other farm animal) with this literary tea towel!