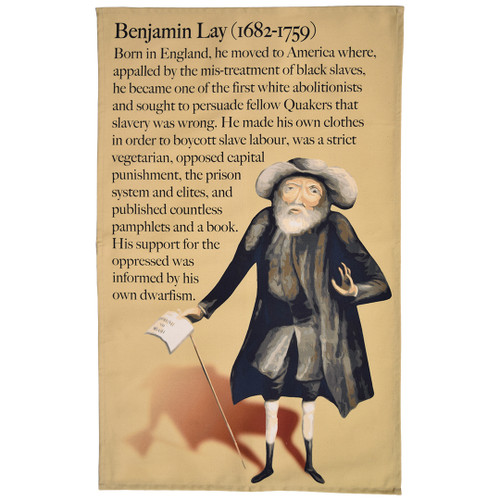 If you like dramatics and radical thinking, you’ll love Benjamin Lay.

On September 19th, 1738, Benjamin Lay, a hunchback as well as a dwarf, arrived at a Quaker meetinghouse for the biggest event of the Philadelphia Yearly Meeting. Under his coat, he carried a sword and a book hollowed-out with a secret compartment, into which he had tucked a pouch of red pokeberry juice. When his turn to speak came, he rose to address the crowd, announcing that slavery was the greatest sin in the world. Throwing off his coat, he declared:

“Thus shall God shed the blood of those persons who enslave their fellow creatures.”

He pulled out his sword, raised the book above his head, and plunged the blade through it. There was chaos as red liquid gushed down his arm, but Lay stood quiet and still. He was quickly carried from the building, but it didn’t matter; he’d delivered his message.

This was Benjamin Lay: militant vegetarian, feminist, opponent of the death penalty, revolutionary abolitionist. His radical thinking put him centuries ahead of his time. Lay refused to consume any commodity produced by slave labor, and he imagined a new world in which people would live simply, make their own food and clothes, and respect nature.

We hope this tea towel inspires a compassionate and radical vision in you too!