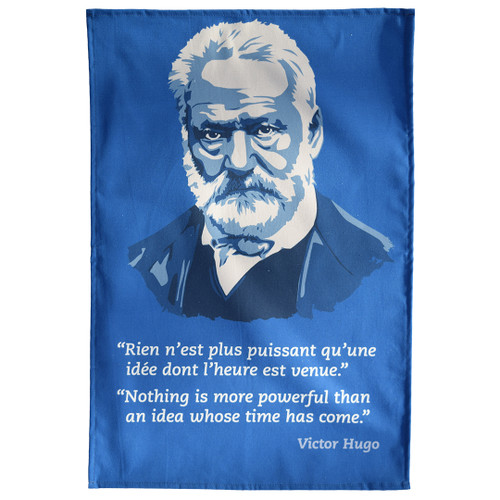 Skip to description
‘Nothing is more powerful than an idea whose time has come.’

We’ll believe Victor Hugo on that one. After all, he had some pretty powerful ideas – so powerful, in fact, that he received 300,000 francs (equivalent to £3m today) for the publishing rights to his epic historical novel Les Misérables, the highest figure ever paid for a work of literature. The novel was more than 1,500 pages long, and to create it, Hugo employed a unique strategy, removing his clothes and locking himself in an empty room with nothing but a pen and paper to distract him. Today, he’s considered one of the greatest French writers ever.

He was pretty celebrated in his time as well ­– the street he lived on was named after him while he was still alive, and his 80th birthday was declared a national holiday, with a procession of 600,000 people walking past his front door while he waved. Hugo enjoyed the fame, but he also used his status to push for radical social change. After being elected to the French National Assembly in 1848, he broke with conservatives to call for universal suffrage, free education for all children, and an end to poverty, as well as launching an internationally renowned campaign to abolish the death penalty.

So, if you’ve got a friend who’s been feeling a little Misérable lately, here’s the perfect literary gift to cheer them up!