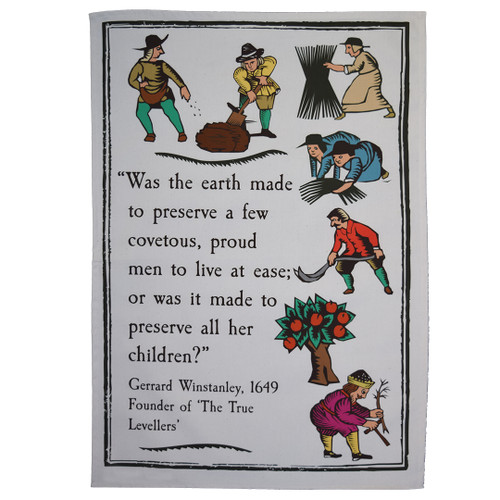 Civil wars and bad harvests had led to widespread unemployment and discontent during the 1640s. Disorder was reported around the country as those suffering seized grains, tore down enclosures and threatened landowners. Discontent spread to the Army as well, culminating in the Leveller mutinies of 1649. And it was against this protest that the True Leveller movement emerged.

The True Levellers, or ‘Diggers’ were the most radical of the sects that arose in the aftermath of the civil wars. Whereas other groups sought political reform or religious freedom, the True Levellers called for the overthrow of the monarchy and the abolition of private property rights in favour of the communal ownership of land.

Regarding the earth as a "common treasury", the True Levellers took direct action to put their ideals into practice. The group occupied common land that had been enclosed, pulling down hedges and filling in ditches to plant crops, in the hope that this would begin the process of restoring the land to its rightful owners, the common people, rather than the nobility who had usurped it.

This tea towel features a quote from Gerrard Winstanley, an English Protestant, religious reformer, political activist and one of the founders of this group.