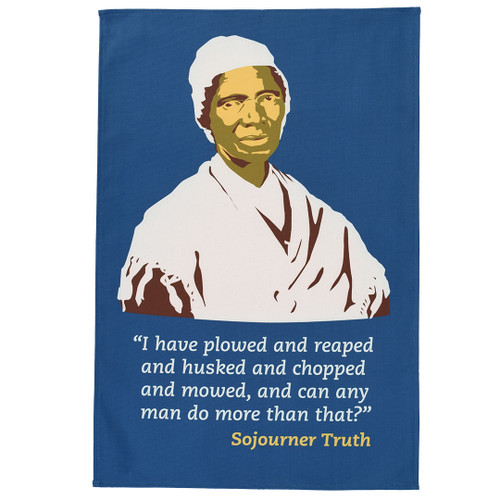 ‘I have plowed and reaped and husked and chopped and mowed, and can any man do more than that?’

This is what Sojourner Truth asked the audience at the Ohio Women's Rights Convention in 1851 during her speech, ‘Ain’t I a woman?’. This impromptu address, where she challenged prevailing notions of racial and gender inferiority and demanded equal human rights for all women and for all blacks, became her best-known speech and was widely disseminated. At a time where advocating for women and African Americans was dangerous and challenging enough, and being one was even harder, her words were a truly radical act.

In fact, her whole life was remarkable. Born into slavery, Truth was sold three times and had five children before she escaped with her infant daughter to a nearby abolitionist family in 1826. The family bought her freedom for twenty dollars and helped Truth successfully sue for the return of her son, making her the first black woman to win such a case against a white man. She then moved to New York City, becoming known as a charismatic speaker, and meeting abolitionists such as Frederick Douglass and women’s rights activists, such as Susan B. Anthony, who inspired her for these causes. In 1843, she declared that God called on her to preach the truth, renaming herself Sojourner Truth and becoming a champion of equality. Through her efforts to help recruit black troops for the Union Army during the Civil War, Truth received an invitation to meet Abraham Lincoln in 1864 at the White House. She spent the rest of the 1860s lobbying against segregation and for the case of former slaves.

In 2014, Truth was included in Smithsonian magazine's list of the ‘100 Most Significant Americans of All Time’ and in 2016, it was announced she would be on the re-designed 10-dollar bill. Unfortunately, the Trump administration refused to commit to the promise, but this tea towel should tide you over until she gets the widespread recognition she deserves!