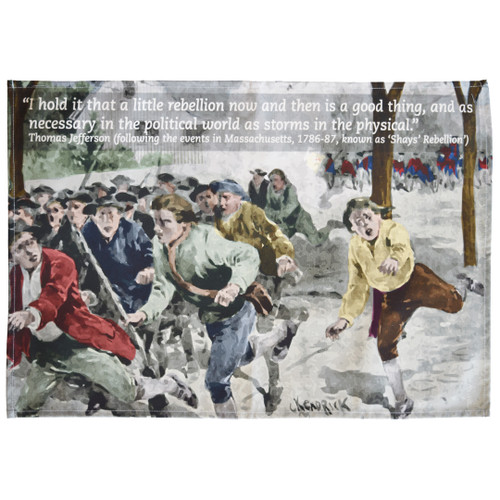 "I hold it that a little rebellion now and then is a good thing, and as necessary in the political world as storms in the physical."

So wrote Thomas Jefferson in a letter to James Madison on January 30th, 1787, from Paris where he was serving as ambassador to France. Having heard about Shays' Rebellion, Jefferson refused to be alarmed or panicked, arguing in the letter that occasional rebellion is in fact a good thing: in the long run, rebellion preserves freedoms.

Shays' Rebellion was an armed uprising in Western Massachusetts and Worcester in response to a debt crisis among the citizenry and in opposition to the state government's civil rights injustices and increased taxation. The fight took place mostly in and around Springfield during 1786 and 1787. American revolutionary war veteran Daniel Shays led four thousand rebels and marched on the federal Springfield Armoury in an unsuccessful attempt to seize its weaponry and overthrow the government. The rebellion was put down by the Massachusetts State militia and another privately-funded local militia.

There is still debate among scholars concerning the rebellion's influence on the Constitution and its ratification. But it exposed the weakness of the government under the Articles of Confederation and led many—including George Washington—to call for strengthening the federal government in order to put down future uprisings.

This is the perfect gift for anyone who believes in the right to rebellion!