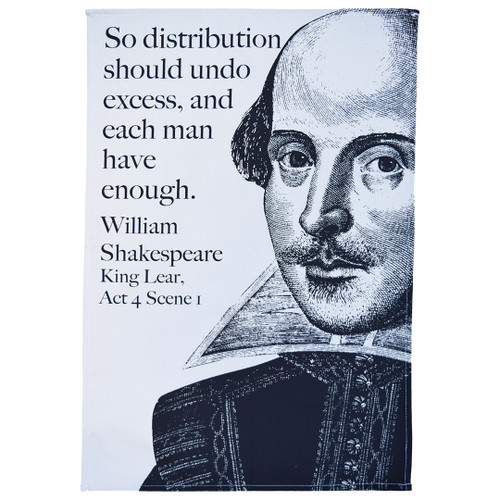 "So distribution should undo excess and each man have enough."

This quotation, is taken from Act 4, Scene one of William Shakespeare’s ‘King Lear’ and is possibly possibly one of the most radical of all his speeches.

Gloucester, a nobleman, has just given a purse away to the poor "naked fellow' we know to be his son, Edgar. Later in the play, King Lear too has a moment of enlightenment, as shown in his "naked wretches speech", and is forced to recognise the pervasive helplessness of the poor in the face of the power of the rich, leading to his eventual rejection of all forms of hierarchy.

Some critics have suggested that Shakespeare is arguing in these episodes for a Christian or Marxist style redistribution of wealth leading to a more egalitarian society and that the play is in fact a devastating critique of capitalism. Certainly he is arguing that concern and pity for the poor are necessary to be fully human. Luxury and material things hide the truth and should be shared with the homeless and poor. Surely we can all agree with that?