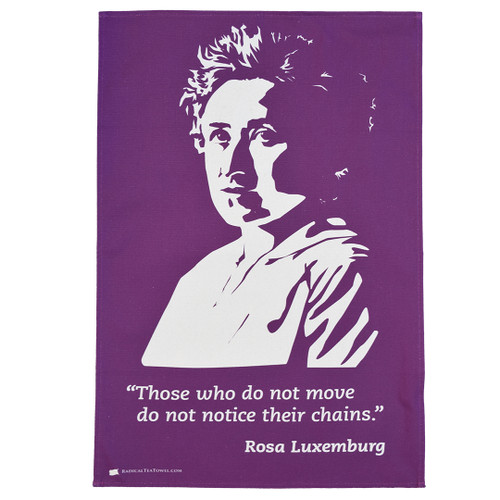 'Those who do not move, do not notice their chains.’

Rosa Luxemburg was a revolutionary socialist of Polish Jewish descent, who played a key role in founding the Polish Social Democratic Party before becoming a German citizen and joining the Social Democratic Party (SPD) of Germany. As a political theoretician Luxemburg developed a humanitarian theory of Marxism, criticising capitalism and dictatorial tendencies of the Bolsheviks, and promoting pacifism and democracy.

When World War One broke out in 1914, the SPD supported the conflict, but Luxemburg went into opposition, breaking away from the party with Karl Liebknecht and founding the Spartacus League, which eventually grew into the Communist Party of Germany. In the winter of 1918, Weimar Germany saw a wave of revolutionary activity, and Luxemburg was murdered, along with Liebknecht for her role in leading the Spartacus Revolt in 1919 by members of the right-wing Freikorps, a loose assemblage of conservative paramilitary groups. Although a century has passed since Luxemburg’s death, she is far from forgotten, her ideas and efforts remembered every year during an annual left-wing march in Berlin.