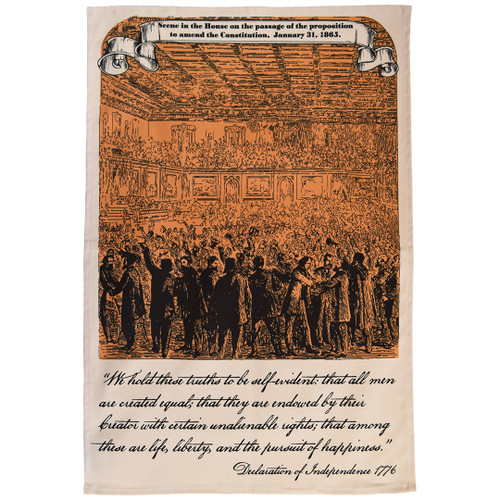 The Thirteenth, Fourteenth and Fifteenth amendments to the US Constitution were adopted between 1865 and 1870 and were a part of implementing the Reconstruction of the American South after the war.

The illustration on our tea towel is inspired by an engraving of the celebrations in the House of Representatives after the passage of the Thirteenth Amendment on January 31st 1865.

The Thirteenth Amendment to the United States Constitution abolished slavery and involuntary servitude, except as punishment for a crime. It was necessary because the Emancipation Proclamation, issued by President Abraham Lincoln in January of 1863, did not end slavery entirely; those enslaved in border states had not been freed.

The Amendment can be seen as going some way towards the fulfilment of the original ideals expressed in the Declaration of Independence of 1776 which stated:

"We hold these truths to be self-evident: that all men are created equal; that they are endowed by their Creator with certain unalienable rights; that among these are life, liberty, and the pursuit of happiness."

The 13th Amendment to the Constitution did not end discrimination against those who had been enslaved and blacks. However, it ended slavery and began the long-term goal of achieving equality for all Americans.