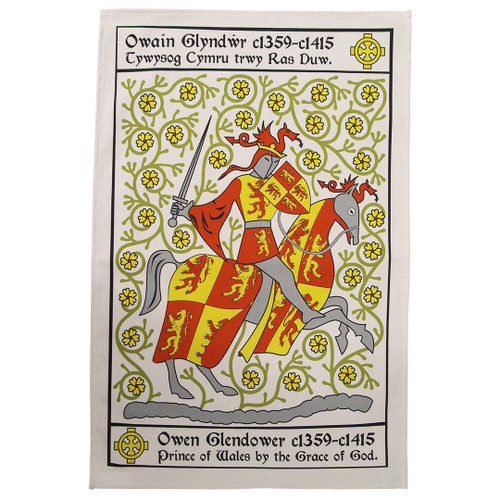 Owain Glyndŵr – called Owen Glendower in Shakespeare – was the last native Welshman to hold the title Prince of Wales. He led a fierce revolt against the English rule of Wales under Henry IV in 1400, and despite being offered a pardon from the king more than once and large rewards being offered for his whereabouts, Glyndŵr never surrendered to the English, nor was never betrayed by his followers even when it became clear the Welsh Revolt was going to fail. With his death Glyndŵr acquired a mythical status as the hero awaiting the call to return and liberate his people.  In his play Henry IV, Shakespeare similarly portrayed Glyndŵr as an exotic, magical and spiritual man. His life and legacy was examined once again in the 19th century, as the Welsh 'nation' began to find its voice once more. The discovery of his seal ­– which has inspired the design on this tea towel ­­– and letters demonstrated his importance as a national leader, and he continues to be held in high regard, now a figure of Welsh culture and history.