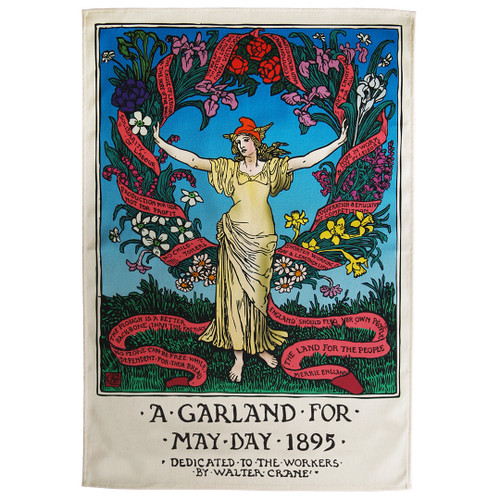 For the English artist and book illustrator Walter Crane, art ‘was at once creative and adaptive, capable of lifting men's thoughts on to the loftiest plane.’ And that’s what he used it to do.

The first half of his career was dedicated to inspiring children through his illustrations of toy books. He is considered to be the most influential children’s book creators of his generation, substantially helping to raise the standards of book illustration. The second half of his career was dedicated to him using his art to inspire workers. He became interested in liberal politics in the 1860s and in 1884, he joined the Social Democratic Federation. A didactic element began to underlie much of his work, with him contributing weekly illustrations for the socialist periodicals Justice and The Commonwealth, as well as producing annual illustrations celebrating May Day – such as the one featured on this tea towel ­– for the magazine socialist magazine The Clarion.

As a member of the Arts and Crafts movement, Crane was in favour of social reform at the same time as condemning the dehumanising effects of industry. In this illustration for May Day 1895, Crane includes slogans that underline this philosophy: ‘the land for the people’, ‘no child toilers’, ‘production for use not for profit’, ‘the plough is a better backbone than the factory’, ‘shorten working day and lengthen life’ to name a few. Which ones resonate most with you and your values?