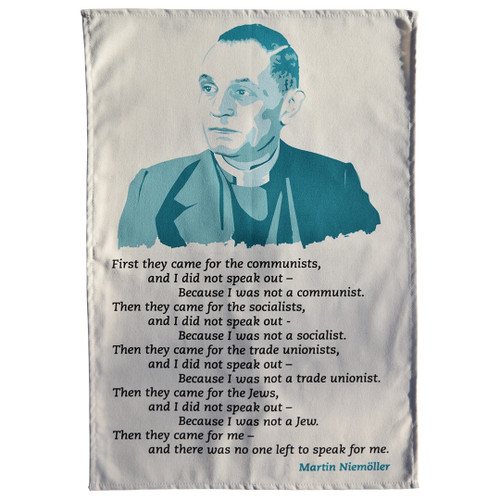 First they came for the communists, and I did not speak out —
Because I was not a communist.

Then they came for the socialists, and I did not speak out —
Because I was not a socialist.

Then they came for the Jews, and I did not speak out —
Because I was not a Jew.

Then they came for me —
and there was no one left to speak for me.

This was a post-war confession first made in 1946 by the German Lutheran Pastor Martin Niemöller. It was a comment on the cowardice of German intellectuals and certain clergy (including, by his own admission, Niemöller himself) following the Nazis’ rise to power and subsequent purging of different groups. Niemöller had been an initial supporter of Adolf Hitler, but he emerged as outspoken opponent of the regime after 1934, and spent the last seven years of Nazi rule in concentration camps, narrowly escaping execution. After his imprisonment, he expressed his deep regret about not having done enough to help the victims of the Nazis and the shame he felt for the wider complicity in the Holocaust. As a result, he turned away from his earlier nationalistic beliefs and was one of the initiators of the Stuttgart Declaration of Guilt. From the 1950s onwards he became a vocal pacifist and anti-war activist, campaigning for nuclear disarmament.

However, it is for the prose quoted on this tea towel for which he is best remembered – words which continue to remind us today to never allow ourselves to be bystanders in the face of injustice.

NB: There are different versions of this prose in circulation, some of which use ‘communist’ instead of ‘socialist’. We’ve chosen to use the latter to reflect the broad swathe of different types of socialists (including communists).