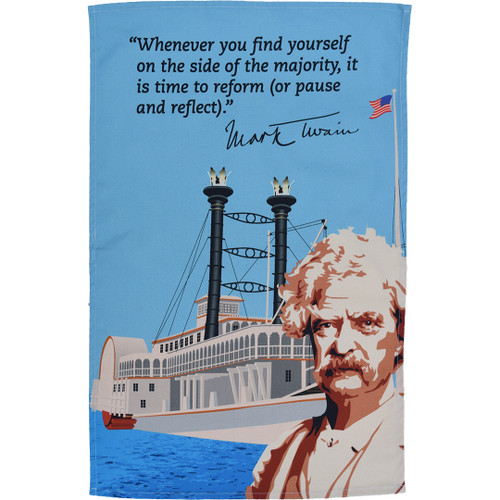 A writer, humorist, entrepreneur, publisher and lecturer, Samuel Langhorne Clemens was born in 1835 in Florida Missouri. He worked as a printer and a riverboat pilot before his first forays into the world of literature as a journalist and a short story writer. He went on to become "the father of American literature", according to William Faulkner.

You've probably never heard of Samuel Langhorne Clemens - he's far better known by his pen-name Mark Twain, a name which allegedly came from his time working on Mississippi riverboats, where riverboatmen would cry "Mark Twain" to indicate the depth of the water ("according to the mark on the line, the depth is two fathoms").

Twain is best known for his classic novel The Adventures of Tom Sawyer (1876) and its sequel The Adventures of Huckleberry Finn (1884). But less well-known is the fact that Twain was also a radical thinker. He was an adamant supporter of abolition, even going so far as to say, "Lincoln's Proclamation  ... not only set the black slaves free, but set the white man free also".

Twain was also a staunch supporter of women's rights and an active campaigner for women's suffrage. His "Votes for Women" speech is considered one of the most famous in history. He died in 1910.

This is the perfect gift for anyone wanting to celebrate the radical legacy of an America's literary giant.