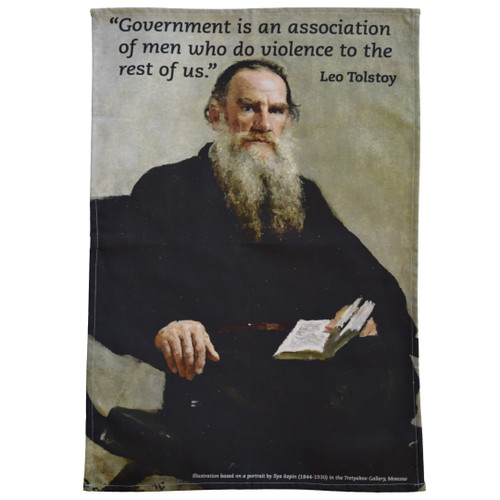 How can you summarise Leo Tolstoy after reading War and Peace? Regarded as one of the greatest authors of all time, Tolstoy is best known for the novels 'War and Peace' (1869) and 'Anna Karenina (1878) which are often cited as pinnacles of realist fiction. Born to an aristocratic Russian family, Count Lev Nikolayevich Tolstoy (1828-1910) came to believe that the aristocracy was a burden on the poor, and that the only way to live together was through anarchism. He opposed private land ownership and the institution of marriage.

In the 1870s, Tolstoy experienced a deep moral crisis, followed by what he regarded as an equally profound spiritual awakening, during which he became a fervent Christian anarchist and pacifist. His ideas on nonviolent resistance as outlined in his work 'The Kingdom of God Is Within You' had a profound impact on such pivotal 20th-century figures as Mahatma Gandhi & Martin Luther King Jr., a debt Gandhi acknowledged in his autobiography, calling Tolstoy "the greatest apostle of non-violence that the present age has produced".

The words on this tea towel come from his work 'The Kingdom of God is Within You' (1894).

He received nominations for the Nobel Prize in Literature and the Nobel Peace Prize but never won, a subject of some considerable controversy.

Tolstoy died of pneumonia at Astapova railway station aged 82 after having spent the final hours of his life preaching love and non-violence to fellow passengers.