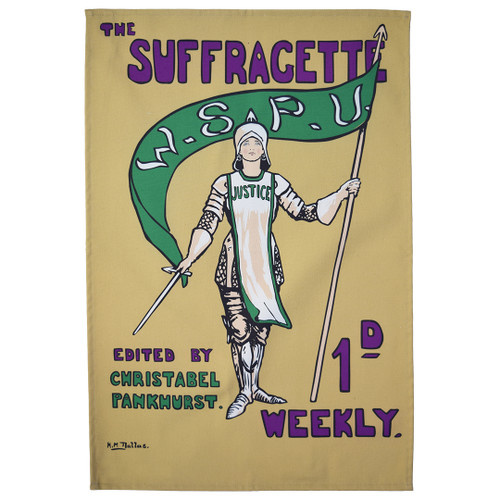 Joan of Arc, the 15th century French heroine of the 100 Years War, was the obvious choice as patron saint of the Suffragettes in the early 20th century. Empowered, courageous, and a leader ­­– what more could they want?

The Women’s Social and Political Union (WSPU) had split off from the National Union of Women’s Suffrage Societies (NUWSS) under the leadership of Emmeline Pankhurst in 1903, disillusioned with the low key approach of the latter. Nicknamed the ‘Suffragettes’ in 1906 by a Daily Mail reporter trying to belittle their efforts, the women were persuaded that only militant tactics could win equal voting rights for women. They embraced their new nickname, even adopting it for use as the title of their newspaper in 1912.

In the Suffragette colours of purple, green and white, this tea towel is based on a poster advertising this official WSPU newspaper. It was originally named 'Votes for Women', but when its editors and financers were dismissed from the movement over their growing doubts about its militant tactics in 1912, the paper was renamed and placed under Christabel Pankhurst’s editorship.

So, if you want to add a little ‘Extra, extra!’ to your kitchen, this is the feminist tea towel for you!