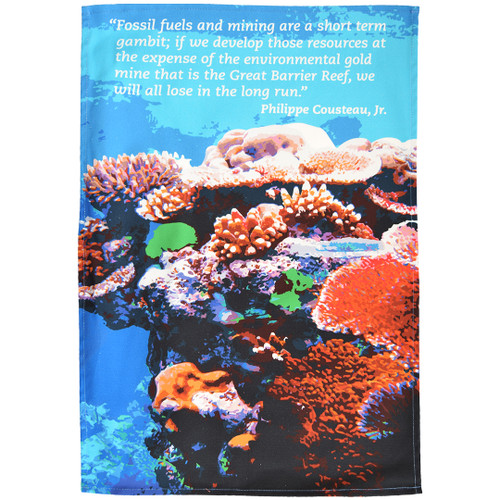 The Great Barrier Reef is located in the Coral Sea, off the coast of Queensland, Australia. It is the world's largest coral reef system, composed of over 2,900 individual reefs and 900 islands stretching for over 2,300 kilometres over an area of approximately 344,400 square kilometres. It can be seen from outer space and is the world's biggest single structure made by living organisms. The reef structure is composed of and built by billions of tiny organisms, known as coral polyps. It supports a wide diversity of life and was selected as a World Heritage Site in 1981. In 1997 CNN labelled it one of the seven natural wonders of the world.

According to a 2012 study by the National Academy of Science since 1985, the Great Barrier Reef has lost more than half of its corals with two-thirds of the loss occurring from 1998 due to a range of factors including climate change, pollution and fishing.

Philippe Cousteau Jr is a scuba diver, film producer, author, speaker, social entrepreneur and adviser on environmental sustainability. He is the grandson of Jacques Cousteau the renowned pioneer of marine conservation and co-developer of the aqua lung.

These words came from a Q&A he did in 2015 with the World Wildlife Fund.