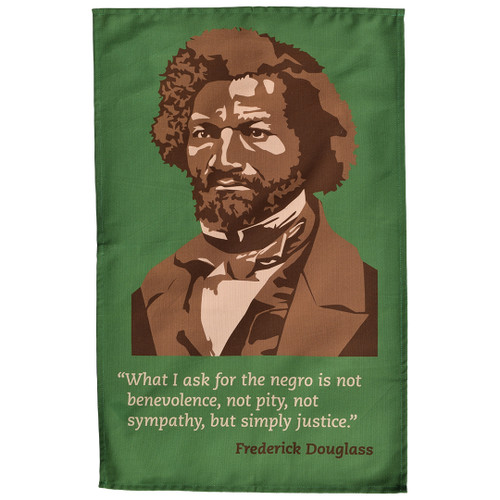 ‘What I ask for the Negro is not benevolence, not pity, not sympathy, but simply justice.’

How does a slave born on a plantation in deeply racist 19th century America go on to be nominated for vice-president of the United States? Just ask Frederick Douglass.

Douglass led an extraordinary life, all the way through. Despite laws forbidding it, he was taught the alphabet as a child, knowledge he passed onto other slaves as a teenager. Aged 20, he escaped slavery, fleeing to the North, where he fiercely campaigned for the rights of African-Americans, women, and native Americans, eventually becoming a national leader of the abolitionist movement in Massachusetts and New York. With 160 separate portraits taken of him, Douglass became the 19th century’s most photographed American, a platform which he called ‘democratic art’ that could finally represent black people as humans. He also became a well-known orator, and was invited to speak at a 4th of July celebration in 1852 in New York. There he delivered a powerful critique of American hypocrisy, entitled ‘What to the Slave is the Fourth of July?’ 'This Fourth July is yours, not mine,' he famously said to those in attendance, and subsequently refused to celebrate the holiday until all slaves were emancipated.

NB: Until the late 1960s, the term 'negro' was used by those both within and outside the community for people of black African origin (Martin Luther King used the term, for example). Although use of the word may now seem dated or even offensive, it should be seen here in its historical context.