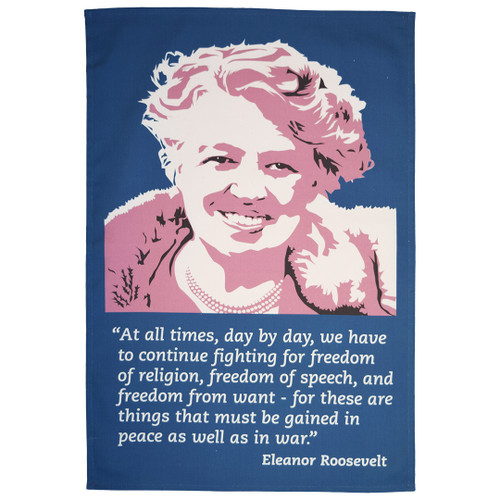 ‘At all times, day by day, we have to continue fighting for freedom of religion, freedom of speech, and freedom from want — for these are things that must be gained in peace as well as in war.’

So wrote Eleanor Roosevelt in her newspaper column, My Day, in 1943. She was the longest serving First Lady of the United States, and she made the most of it.

A particularly outspoken First Lady, she significantly defined the role of her office for her successors, often taking Franklin Roosevelt’s place at public events due to his disability. She also held regular press conferences, many of which were women-only: a radical demand at a time when women journalists had traditionally been excluded from serious media events. By hosting these, papers were pressured into hiring more women reporters, pushing for equality in the profession.

As well as supporting an increased role for women in the workplace, she advocated civil rights for African Americans. In 1938, during a conference for Human Welfare held in Alabama, Eleanor sat directly beside an African American associate, ignoring the designated whites-only section en route. After being told that segregationist policies prohibited whites and blacks from sitting together at public functions, the First Lady asked for a ruler. Measuring the distance separating the white and black seating areas, she placed her chair directly in its centre and sat there defiantly until the meeting concluded.

Later, she became the US's first delegate to the United Nations, where she became a driving force: she chaired the UN Commission on Human Rights and oversaw the drafting of the Universal Declaration of Human Rights. So… Franklin Roosevelt who?