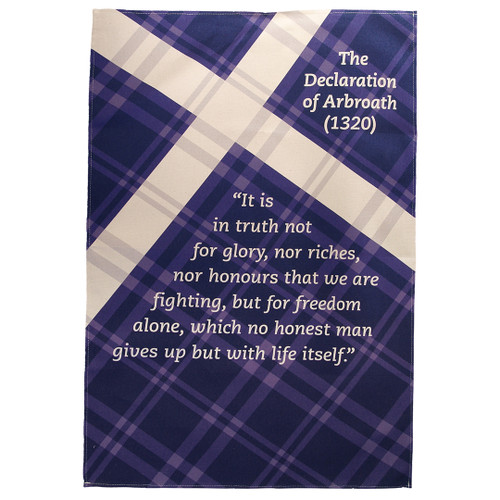 Skip to description
‘It is in truth not for glory, nor riches, nor honours, that we are fighting, but for freedom - for that alone, which no honest man gives up but with life itself.’

This tea towel features the best known words in the Declaration of Arbroath, a statement of Scottish Independence written in 1320. It’s the most famous text in Scottish history, seen by many as the founding document of the Scottish nation. Written by the barons and whole community of the kingdom of Scotland in the form of a letter, it was submitted to Pope John XXII, asking him to recognise Scotland's independence after England refused to accept William Wallace's (aka Braveheart) victory at Stirling Bridge in 1297. Over the centuries various copies and translations have been made, including a microscopic edition. The declaration was a radical movement in western constitutional thought – in fact, the American Declaration of Independence, written 456 years later, was partially based on it!