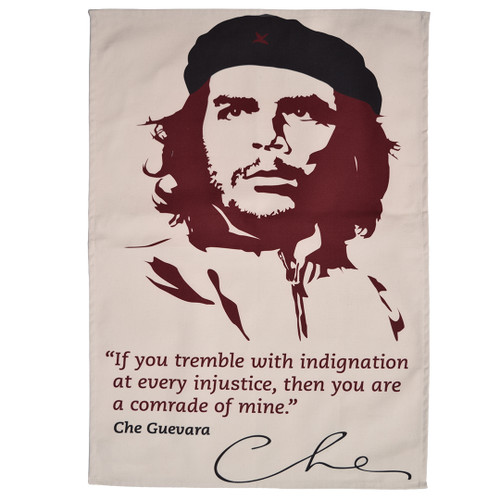 Skip to description
'If you tremble with indignation at every injustice then you are a comrade of mine.’

On 5th March 1960, photojournalist Alberto Korda captured perhaps the most famous portrait photograph in history. He was at a speech given by the Cuban prime minister, Fidel Castro, when Che Guevara appeared beside the podium for a few moments, the metal star on his beret catching the sunlight. In this time, Korda took an iconic photo, Heroic Guerrilla, now one of the most reproduced photos of all time. After Che’s execution in Bolivia, the image was taken up by protesters marching against the Vietnam War and for civil rights, and soon, rebellious leftist causes around the world (including Radical Tea Towel!)

You could call this a poetic legacy for Che: An Argentine Marxist, revolutionary, politician, and guerrilla leader, he toured Latin America on a motorcycle, hoping to reform the continent through radical upheavals. He was a man who sought revolution, and has since become an icon for others seeking it too.