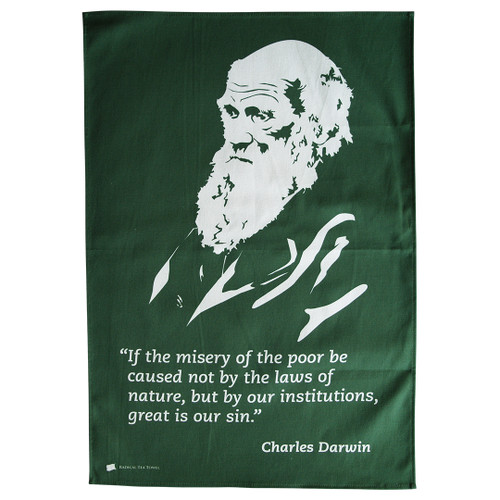 Charles Darwin’s ground-breaking theory was published in 1859, set out in his book ‘On the Origin of Species.’ In it, he proposed a radical theory of evolution by natural selection. This was a major challenge to the foundations of western civilisation, one that made us re-think our place in the world. In 1871, he transformed our world-view once again through his ‘The Descent of Man’, arguing that humans shared a common ancestor with apes. His propositions were initially met with outrage from members of the Church of England, but this did not stop his work from becoming best-sellers, and by the 1870s the scientific community and much of the general public had accepted evolution as a fact.

In Darwin's lifetime, his writing was translated into German, Danish, Dutch, French, Hungarian, Italian, Polish, Russian, Serbian, Spanish and Swedish. He was one of the most influential figures in human history, speaking across time and space. This tea towel honours his radical work. It’s a natural selection for any of your science-loving friends!