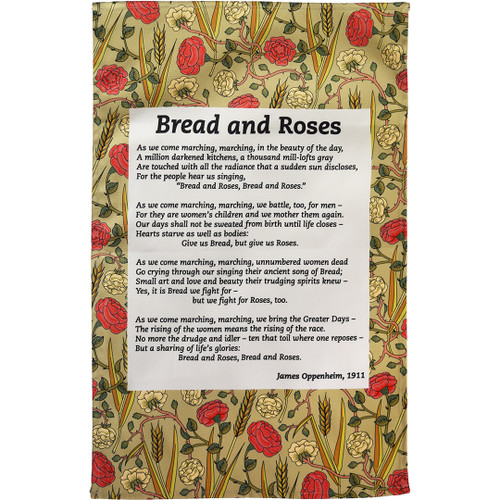 "Bread and Roses" is a political slogan as well as the name of an associated poem and song. It originated from a line in a speech given by American women's suffrage activist Helen Todd:  "bread for all, and roses too" which also inspired the title of the poem Bread and Roses by James Oppenheim. The poem was first published in The American Magazine in December 1911, with the attribution line "'Bread for all, and Roses, too'—a slogan of the women in the West." The poem has been translated into other languages and has been set to music by at least three composers.

Our tea towel features the original poem by James Oppenheim. There have since been other updated versions.

The poem is closely associated with the Lawrence textile mill strike of 1912, which was in protest of a reduction in pay. During the strike the women mill workers carried signs that quoted the poem, reading “We want bread, and roses, too”.

'Bread and Roses' was set to music by Mimi Fariña in the 1970s, and has become an anthem for labour rights, and especially the rights of working women, in the United States and elsewhere.

The 2014 film 'Pride' depicts the members of a Welsh mining community singing "Bread and Roses" at a National Union of Mineworkers lodge during the UK Miners' strike (1984-1985).