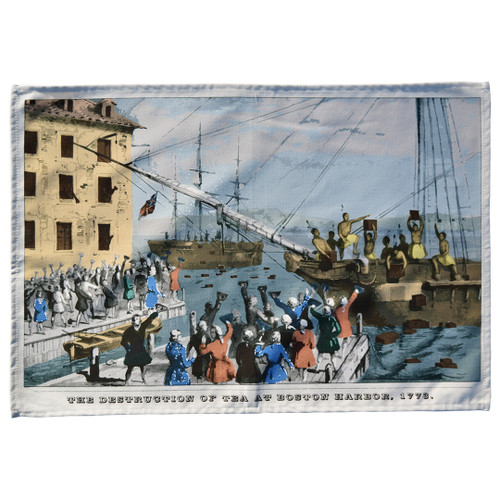 It turned out to be a lot more than just a storm in a tea cup. On December 16, 1773, angry American colonists boarded a British ship and destroyed a shipment of Chinese tea that had lately arrived in Boston harbor by throwing it overboard.

The object of their rage was the Tea Act of May 10 which allowed the British East India Company to sell tea to America virtually tax-free. In the meantime, the colonists were being taxed to the hilt by the British. American Patriots found the Tea Act a violation of their rights to be taxed only by their elected representatives, as they were not represented in the British Parliament.

This was one of the events that led to the beginning of the American War of Independence in 1775.

This design is inspired by "The Destruction of Tea at Boston Harbor", a lithograph by Nathaniel Currier (1846), depicting the Boston Tea Party protest.