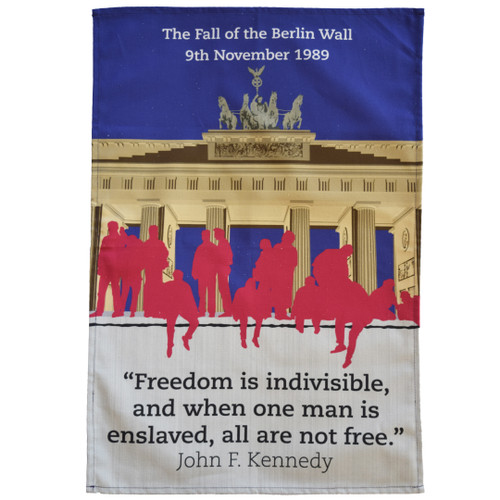 It symbolically divided a continent for 28 years. It was the most overt expression of Cold War tension between east and west, yet on the evening of 9 November 1989 the Berlin Wall began to melt away almost as quickly as it had been erected. Following the overturning of Communist regimes in Poland and Hungary and increasing numbers of East Germans escaping to the West, there was a mass protest by half a million people in East Berlin demanding free movement. Five days later, muddled reports were being disseminated that the government was opening the gates in the wall and East Berlin's residents flocked to get a glimpse of the West and in many cases meet up with relatives they had not seen for decades, if ever. It was too much for the badly briefed guards at the Wall to cope with, and soon people were flooding unabated across the wall. Many climbed on top of parts of the Wall and began breaking it with axes.

The Berlin Wall was a guarded concrete barrier that had physically and ideologically divided Berlin from 1961 to 1989. The German Democratic Republic (East Germany) officially referred to the Berlin Wall as the "Anti-Fascist Protection Rampart" whereas in West Berlin the Wall was sometimes described as the "Wall of Shame" and seen as a restriction on freedom of movement. Along with the separate and much longer Inner German Border (IGB), which demarcated the border between East and West Germany, it came to physically symbolise the "Iron Curtain" that separated Western Europe and the Eastern Bloc during the Cold war.

This tea towel shows the Brandenburg Gate which had become a symbol of freedom and the desire to unify the city of Berlin and where on 2–3 October 1990, the official ceremony to mark the reunification of Germany was held and the flag of a reunified Germany was raised.