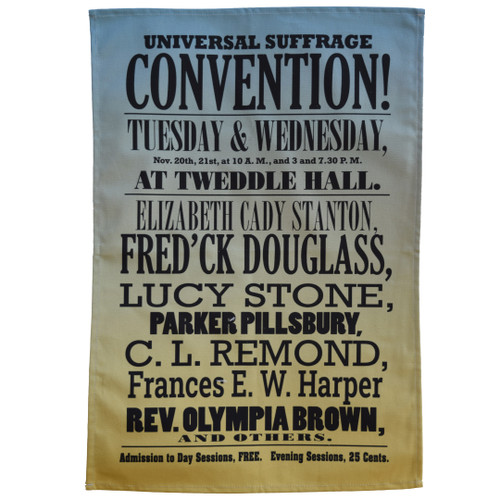 The Seneca Falls Convention was the first women's rights convention in the United States, advertising itself as "a convention to discuss the social, civil, and religious condition and rights of woman". Held in July 1848 in Seneca Falls, New York, the meeting launched the women's suffrage movement, which more than seven decades later ensured women the right to vote.

The convention, organised by female Quakers and Elizabeth Cady Stanton, attracted widespread national attention. It was soon followed by other women's rights conventions, including one in Rochester, New York two weeks later. In 1850 the first in a series of annual National Women's Rights Conventions met in Worcester, Massachusetts.

During the Seneca Falls Convention, 11 resolutions on women's rights were discussed and all were passed unanimously except for the ninth resolution, which demanded the right to vote for women. Stanton and African American abolitionist Frederick Douglass gave impassioned speeches in its defence. He argued eloquently for its inclusion, saying he could not accept the right to vote himself as a black man if women could not also claim that right. Douglass argued that the world would be a better place if women were involved in the political sphere. In the end - and no doubt because of Douglass's impassioned speech - the suffrage resolution was retained.

The convention's 'Declaration of Sentiments', its manifesto, became "the single most important factor in spreading news of the women's rights movement around the country in 1848 and into the future", according to historian, Judith Wellman.

In the following years, the convention’s leaders continued to campaign for women’s rights at state and nationwide events. Reformers frequently referred back to the Declaration of Sentiments as they campaigned for women’s rights.