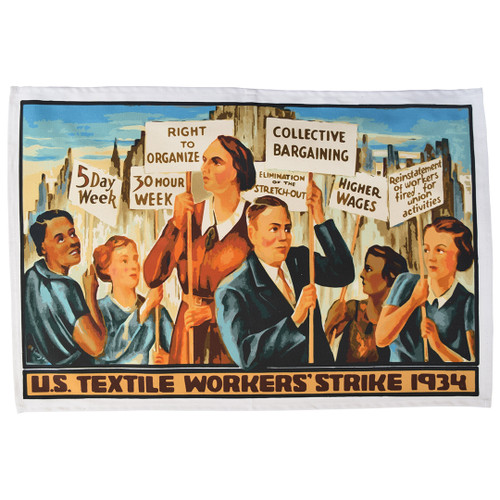 The textile workers strike of 1934, a year after the start of the "New Deal", was the largest strike in the labor history of the US at the time, involving 400,000 textile workers from New England, the Mid-Atlantic states and the Southern states, and lasted twenty-two days.

Although the workers had many grievances, including long hours and low wages, the increase in individual workers’ responsibilities while banning restroom trips and other breaks (the so-called the "stretch-out"), the lack of labor representation was also a major factor.

Even though textile workers began joining the the United Textile Workers (UTW), the largest labor union in the textile industry, in huge numbers the UTW was unable to bargain effectively with mill owners. By mid-September, there was little progress and excess textile supply further harmed the strikers’ cause. A mediation panel appointed by President FD Roosevelt concluded that the grievances of textile workers called for further study, but no concrete government action was taken on their behalf. After the President himself implored the striking workers to return to the mills, the strike ended.