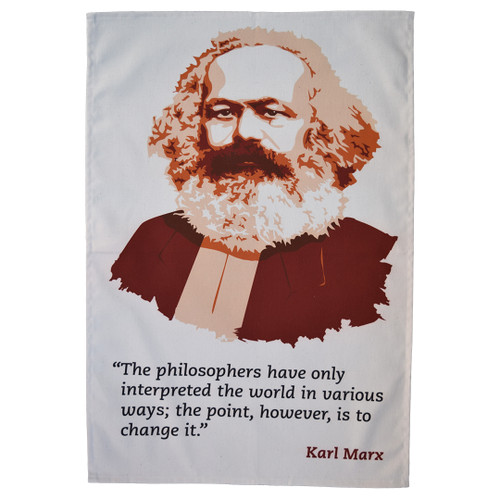 "The philosophers have only interpreted the world, in various ways. The point, however, is to change it."

With a name like Radical Tea Towel, it would be blasphemous to leave out the OG* radical.

We know you’ve heard of Karl Marx: the German philosopher, economist, and revolutionary socialist is perhaps one of best known figures in history today. Although he didn’t invent communism, he popularised it through his seminal political theory, the Communist Manifesto, which he wrote in 1848 with Friedrich Engels. In it, he envisioned that the last phase of capitalism would be a workers’ revolt where the proletariat would seize the means of production from the bourgeoisie and share them in a new, classless society. (Kind of like, ‘sharing is caring’, but more intense.) He later published Das Kapital, where he argued that an economic system based on private profit (i.e. Capitalism) was inherently unstable and would inevitably collapse. 50 years after its publication, the ideas contained in this book would go on to inspire the 1917 Bolshevik Revolution in Russia and more.

So, here’s the most radical tea towel you can get – oh, go on, you have nothing to lose but your chains (and your dirty dishes.)