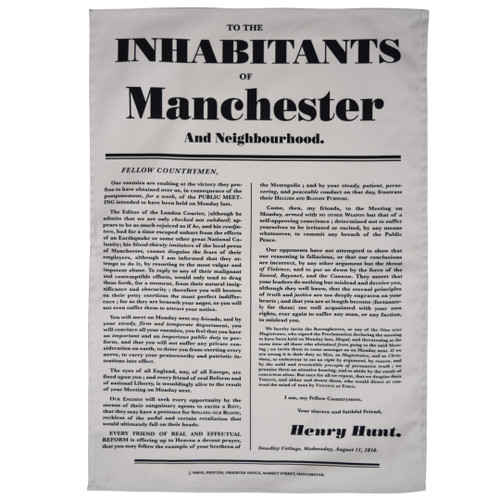 They turned out to be frighteningly ominous words:

"Our Enemies will seek every opportunity by the means of their sanguinary agents to excite a Riot, that they may have a pretence for Spilling our Blood".

This tea towel (which includes these words) is a recreation of a handbill distributed by the radical orator Henry Hunt prior to his public address a week later in St Peter's Field, Manchester. Britain at the beginning of the 19th century was in deep recession following the Napoleonic Wars and protectionist legislation. The working classes suffered the financial consequences of this yet had no voting rights.

So on 16th August 1819, a crowd of between 60-80,000 gathered in St Peter's Field to hear what Hunt had to say. Magistrates ordered the cavalry to arrest Hunt and charge the crowd... and the rest, as they say, is history. Perhaps as many as 700 people were injured and 18 killed in the infamous Peterloo Massacre.