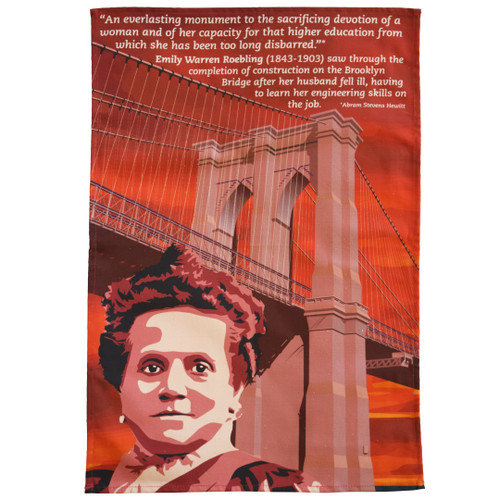 Emily Roebling is chiefly remembered for her contributions over a period of more than 10 years to the completion of the Brooklyn Bridge after her husband Washington Roebling, the chief engineer, took ill. She handled most of the chief engineer duties, including day-to-day supervision and project management. While Emily and her husband jointly planned the bridge's continued construction, she dealt with politicians, competing engineers, and all those associated with the ongoing works. She was so involved that people began to believe she was the sole engineer behind the bridge's design.

The Brooklyn Bridge was completed in 1883 and Emily Roebling was the first to cross the bridge by carriage. At the opening ceremony, Roebling was honoured in a speech by Abram Stevens Hewitt, who said that the bridge was "an everlasting monument to the sacrificing devotion of a woman and of her capacity for that higher education from which she has been too long disbarred".

Roebling went on to support several women's causes and social organisations and her influential essay, 'A Wife's Disabilities' (1899), which won wide acclaim and awards, argued for greater women's rights and railed against discriminatory practices targeted at women.

Today the Brooklyn Bridge is marked with a plaque dedicated to the memory of Emily Warren Roebling, her husband Washington Roebling, and her father-in-law John A. Roebling. In 2018 The New York Times published a belated obituary for Emily, part of a series of obituaries for women and minorities whose achievements had been overlooked at their deaths.