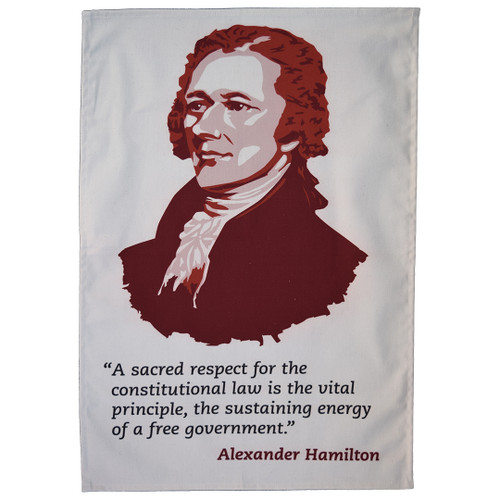 'A sacred respect for the Constitutional Law is the vital principle, the sustaining energy of a free government.'

We’re sure you’ve heard of Alexander Hamilton, (possibly even in a Grammy-winning song) but in case you haven’t, here’s where it’s at: Alexander Hamilton (1755-1804) was one of the Founding Fathers of the United States. While serving as the country's first Secretary of the Treasury under President George Washington, Hamilton established a national bank system, the United States Coast Guard, and the New York Post newspaper. Hamilton advocated a stronger role for the federal government, and was an active participant in discussions regarding the new US Constitution. He died in the summer of 1804, in, bizarrely, a duel against American Vice-President Aaron Burr.

Today he’s famous for featuring on the $10 bill and being the subject of a hugely successful Broadway production. So there you go: the man, the money, the musical. (And the tea towel! You’re welcome.)