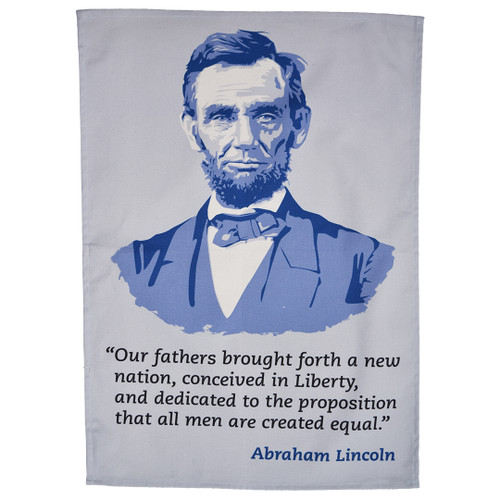 ‘Four score and seven years ago our fathers brought forth on this continent, a new nation, conceived in Liberty, and dedicated to the proposition that all men are created equal.’

Abraham Lincoln may have actually been the 16th President of the United States, but in many ways he can still be called a ‘president of firsts’. He was the first bearded US President, the first president to be photographed at an inauguration, and, notably, the first to vocally oppose slavery. Although he was assassinated in 1865, his five years of presidency saw radical upheavals: he issued the 'Emancipation Proclamation' of 1863, legally freeing 3.5 million enslaved African-Americans, he ensured the passage of the Thirteenth Amendment to the US constitution in 1865, outlawing slavery, and he was President during the entirety of the American Civil War, leading the Union side to victory and ensuring that the US remained one nation. The quote featured on this tea towel comes from his Gettysburg Address, given during the Civil War. It is now one of the best-known speeches in American history.