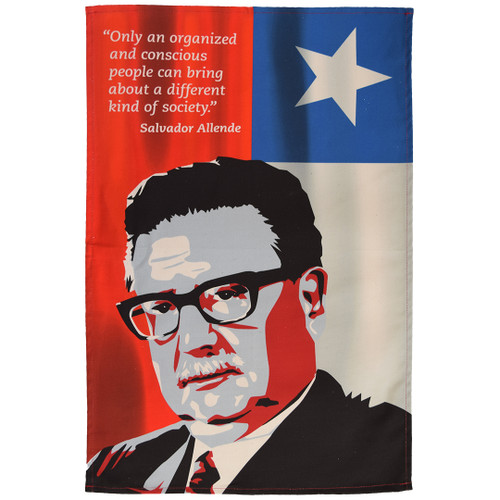 Salvador Guillermo Allende Gossens was a Chilean physician and socialist politician who served as the 28th President of Chile. Allende was head of the Popular Unity government from 3 November 1970 until his suicide on 11 September 1973 during a US-backed military coup led by Augusto Pinochet. He was the first Marxist to be elected president in a liberal democracy in Latin America.

President Allende immediately embarked on what he called “the Chilean path to socialism", nationalizing the copper industry that had been dominated by U.S. companies and using the money to fund land redistribution while improving health care, education and literacy.

Allende's embrace of socialism was a Cold War nightmare for U.S. President Richard Nixon, who approved a covert campaign to aggravate the country’s economic chaos and helped provoke the military takeover.

The September 11 coup was initially supported by many Chileans who were fed up with runaway inflation, chronic shortages and factory takeovers. But it destroyed what they had proudly described as South America’s strongest democracy. Pinochet went on to shut down Congress, outlaw political parties and send security forces to round up and kill suspected dissidents.

Pinochet's dictatorial regime arrested some 130,000 people over a three year period, many of them imprisoned for political reasons. Approximately 3,000 people were killed, and many more were violently tortured.

So this tea towel represents not only socialism and progress, but the values of democracy and freedom that Allende stood for and that Pinochet's regime tried to destroy. As they say: you can kill a person, but you cannot kill an idea.