Today marks the birth of one of Europe's most prolific 20th century political intellectuals. But which political tradition can actually claim him as their own?

The era-defining German playwright, Bertolt Brecht, was born in Bavaria today in 1898.

Having matured during the Great War – seeing a stint of service as a conscript during its closing months – Brecht came to dominate the theatre scene of the 1920s Weimar Republic as an avant-garde and thoroughly anti-capitalist writer and director.

Such a character was quickly marked for persecution when Hitler came to power in January 1933, and Brecht was driven out of Germany and into the diaspora of refugee intellectuals fleeing Nazism. 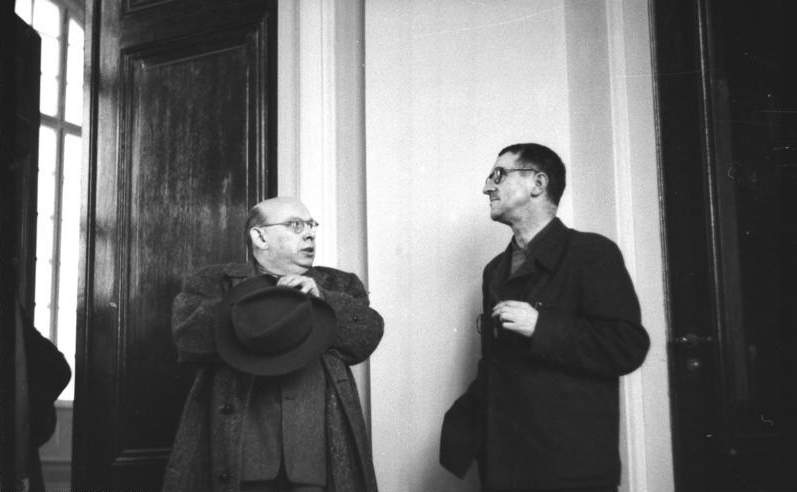 Above: Brecht (right) with the Austrian composer Hanns Eisler in 1950

This diaspora was quite an impressive group of people – how could it not be when the first condition of membership was to be hated by Nazis?

It had an all-star cast made up of men and women like Albert Einstein (fled to the United States in 1933), the anti-totalitarian Jewish-born philosopher Hannah Arendt (who escaped Nazi persecution twice before ending up in the US in 1941), and the ‘Frankfurt School’ Marxist Walter Benjamin (fled to Spain in 1932).

Given the track record of creative accomplishment, poignant social commentary, and anti-Nazism associated with Brecht and his fellow exiles, all of the major traditions of non-conservative Western politics have since tried to ‘claim’ as many of these figures as they can.

But in Brecht’s case, none are able to get a firm grip.

In this 'Quest for Brecht', Western economic liberalism has to give up straight away – its capitalist ideology was a major target of Brecht’s work long before the Nazis came onto the scene.

Many if not most of his plays were profoundly critical of contemporary capitalism. As early as February 1919, Brecht’s Drums in the Night consciously aligned itself with Rosa Luxemburg’s Spartacist League against the bourgeois class which had thrust Germany into the First World War.

Brecht would later reflect that “when I read Marx’s Das Kapital I understood my plays.” 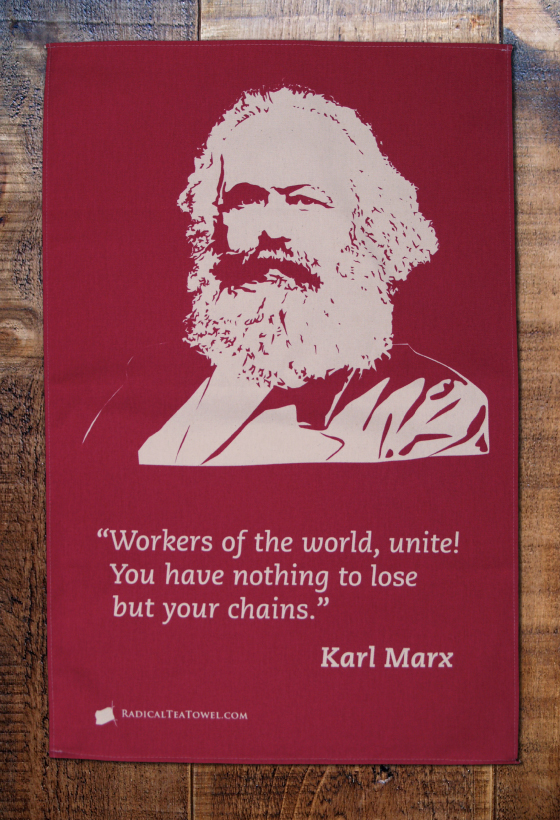 Above: Karl Marx's legendary call to action inspired many writers and artists of Brecht's generation

But social democrats, who would normally jump in at this point in the story to claim such an anti-capitalist, anti-Nazi literary figure for themselves, quickly find Brecht slipping through their fingers as well.

From the mid-1920s onward, much of Brecht’s playwriting was ‘agitprop’ – a form of communist propaganda which used popular media like the theatre. His 1926 play Man Equals Man, for example, was a positive nod to Bolshevik collectivist thought.

What’s more, in 1949 – after being harassed by the infamous  House Un-American Activities Committee while living in the United States – Brecht defected to the Soviet Bloc, living out his days in East Berlin.

Western social democracy, then – which defines itself in opposition to the ‘Orthodox Marxism’ of the Soviet Union – can hardly declare Bertolt Brecht a part of its political heritage either.

But even with his Marxist leanings, Soviet-style communism would also struggle to credibly claim Brecht as one of its own.


Brecht's alienation by the Eastern Bloc

Despite Brecht's move to East Berlin and historic sympathy for the Bolsheviks, he would eventually grow colder toward the Eastern Bloc.

Reflecting on the brief June 1953 (socialist-led) uprising in East Germany, Brecht observed that the state-controlled Writers Union had declared that “the people had forfeited the confidence of the government and could win it back only by redoubled efforts,” before wondering ironically:

“Would it not be easier in that case for the government to dissolve the people and elect another?”

Brecht died just a few years after writing these lines, increasingly pessimistic about Communist East Germany. Had he lived into the 1960s and 1970s – to see notorious Soviet repressions in Czechoslovakia and Poland – his pessimism would likely only have grown deeper.

So, while it has a firmer grasp on him than conventional liberalism and social democracy, even the orthodox communist tradition can’t really keep a hold on Bertolt Brecht.

Though we usually label people like Brecht to highlight what was most ‘essential’ to their character, in his case, the most essential thing is that you can’t label him at all.

Neither the economic exploitation of Western liberalism, nor the cautious moderation of social democracy, nor the political unfreedom of Soviet communism sat particularly well with a free spirit like Brecht.

Perhaps the fact that such a free-thinking and creative man sits so uncomfortably within the three main strands of humanist thought which have organized most societies since 1945 is reason to believe it's our social system itself (surprise, surprise) which still needs a lot of work.