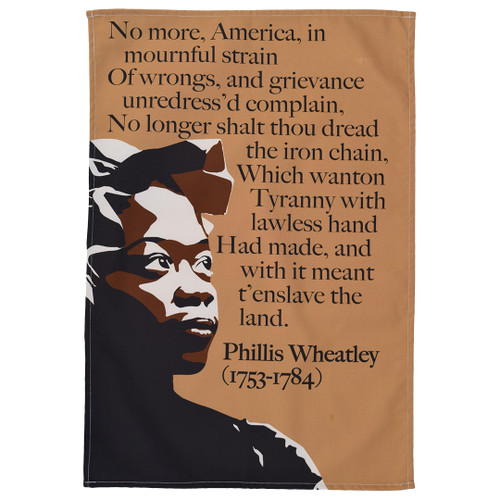 Phillis Wheatley (1753-1784) was an American poet, and the first African-American female poet to have her work published. She was born in Africa, but as a child was captured and sold into slavery in North America. She was bought by John Wheatley of Boston in 1761, whose family taught her to read and write. Wheatley's book, 'Poems on Various Subjects, Religious and Moral' was published in London in 1773, the first book ever published by an English-speaking person of African descent. The quotation on the tea towel is an excerpt from her 1772 poem on slavery and tyranny in the colonies, and reads as follows:

"No more, America, in mournful strain
Of wrongs, and grievance unredress’d complain,
No longer shall thou dread the iron chain,
Which wanton Tyranny with lawless hand
Had made, and with it meant t’enslave the land."