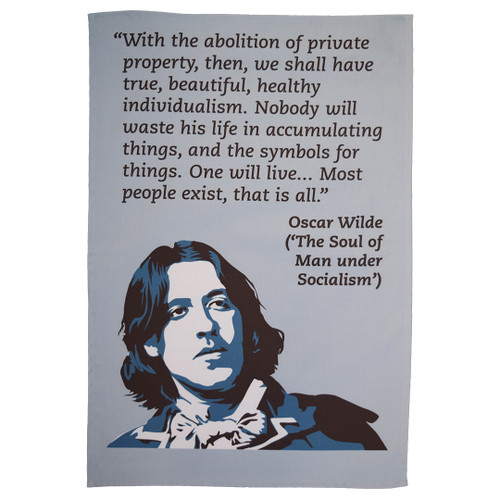 ‘With the abolition of private property, then, we shall have true, beautiful, healthy Individualism. Nobody will waste his life in accumulating things, and the symbols of things. One will live… Most people exist, that is all.’

Unlock your Wilde side - here’s a literary gift for a rebellious romantic! This tea towel celebrates Oscar Wilde, an Irish author, playwright and poet. Unconventional, flamboyant, and charming, Wilde became one of the best-known personalities of his day and one of London's most popular playwrights. Today he is remembered for his iconic works: The Picture of Dorian Gray, An Ideal Husband, and The Importance of Being Earnest – to name a few. In this period, Wilde fell in love with Lord Alfred Douglas, at a time when homosexuality was criminalised in England. Unfortunately, in 1895 he was imprisoned for 'gross indecency' as a result, and was forced to spend the remainder of his life in exile, where he died an early death. His sparkling wit lived on, however, and continues to shine through his writing.

Wilde was finally given justice and posthumously pardoned in 2017, under the UK government's ‘Turing Law'.