In the early 1940s a Lakota Indian Chief, Henry Standing Bear, wrote to the Polish-American architect Korczak Ziolkowski and asked if he'd be willing to build a monument to commemorate Native American history.

The letter ended: "My fellow chiefs and I would like the white man to know the red man has great heroes, too."

But who was it they proposed to embody the epic history of their people? It wasn't Sacagawea - though a formidable woman, she personified cooperation with white America at a moment when Indian leaders wanted to express resistance.

The recent completion of Mt Rushmore had enraged Native America. It was a monument to white presidents in the Black Hills of South Dakota - land sacred to the Natives of the region.

Henry Standing Bear and his fellow chiefs wanted their counter-sculpture to represent an Indian who had fought against the American empire.

The choice was easy - Crazy Horse (killed by American soldiers on this day in 1877). 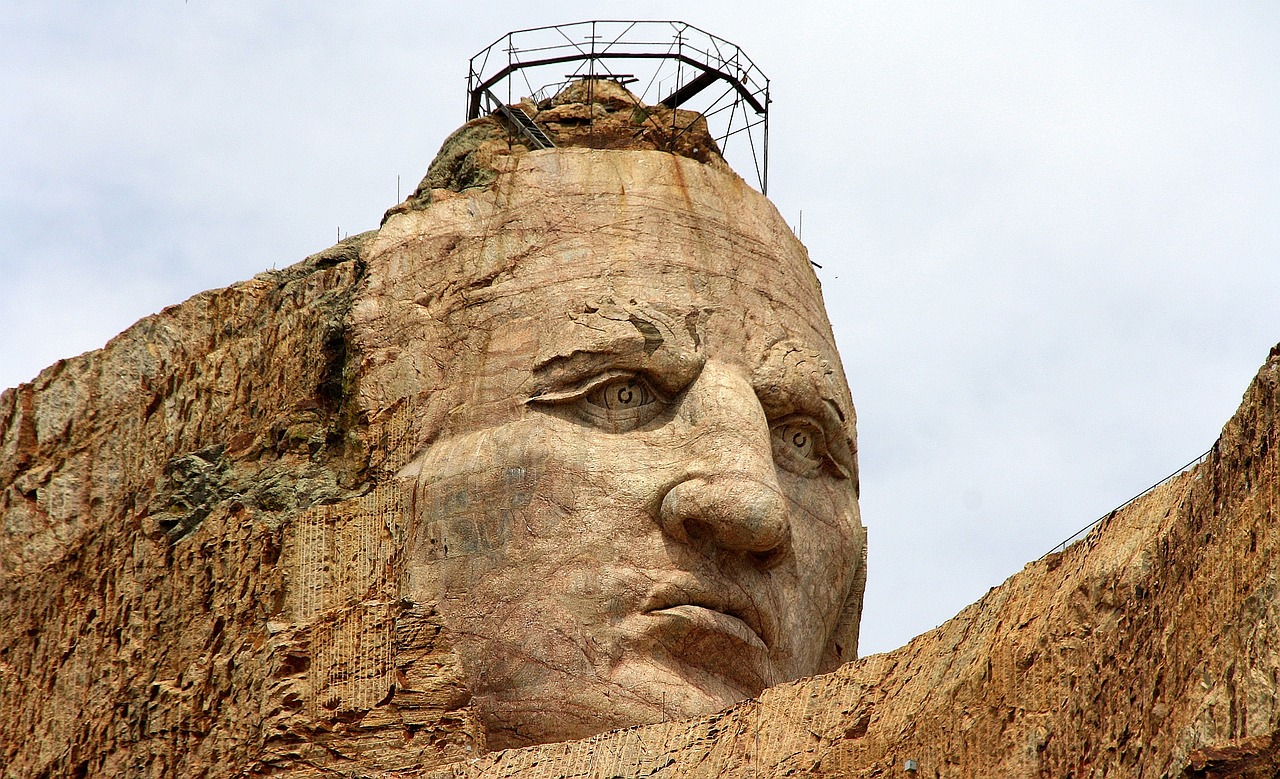 An Oglala Lakota (one of the many sub-branches of the Sioux Indians), Crazy Horse was born in 1840 at a time when the United States' thirst for land was driving a bloody expansion into what remained of Indian territory in North America.

Crazy Horse grew up with his younger brother, Little Hawk, in a Lakota camp in modern-day Wyoming. It was here in 1854 that he had his first experience of US brutality when Federal forces stormed the camp in search of a supposed cow thief, murdering the camp's chief, Conquering Bear, in the process.

After this, Crazy Horse committed himself to a life of resistance against the US and its growing empire.

He was well-suited to the task, as a fearless warrior and shrewd tactician. Already by the mid-1860s his tribe had named him 'Ogle Tanka Un' ('Shirt Wearer' – meaning war chief) for his successes in battle against US forces.

Soon after, in December 1866, Crazy Horse led the decoy manoeuvre which enabled a combined force of Lakota and Cheyenne Indians to defeat a US force ranging out of Fort Phil Kearny in northeast Wyoming.

A lull followed, until the Indians of the north had their final showdown with the US empire - the Great Sioux War of 1876-77.


The fall of the Sioux nation

It began with an astonishing Indian victory in the river lands of Montana. On 17th June 1876, at the Battle of the Rosebud, Crazy Horse led 1,500 soldiers in an attack against 1,000 US troops under George Crook. The action delayed Crook, who was trying to link up with the US 7th Cavalry Regiment of Colonel George A. Custer.

The rest is well-known. On 25th June, beside the Little Bighorn River, a large Indian force was led by Sitting Bull and Crazy Horse to a dramatic victory against Custer.

Crazy Horse's earlier action at Rosebud Creek made this possible, and his bravery on the field was a defining feature of both battles.

One eye-witness recalled of Crazy Horse at the Little Bighorn that "he was the bravest man I ever saw. He rode closest to the soldiers, yelling to his warriors. All the soldiers were shooting at him, but he was never hit."

The Battle of the Little Bighorn was the last great war-cry of Native America against its conquest.

Alarmed by Custer's defeat, the federal government poured more and more troops into the region. After a harsh winter in 1876-7, Crazy Horse surrendered to save his people from starvation and death.

Later, on 5th September 1877, the 'Ogle Tanka Un' was bayoneted by an American soldier while in the custody of the US army.


The Crazy Horse memorial and its lasting message

It goes without saying that no commemoration, whatever its scale, can redress the historical injustice done to the Native American people - injustice upon which the modern United States was built.

Three centuries of colonisation, genocide, and ethnic cleansing cannot be undone with a statue of Crazy Horse.

But such tributes can, at the very least, prevent the dispossession of Native Americans from being written out of the American story just because it's an uncomfortable truth for those who rule.

What's more, the story of Crazy Horse and his resistance gives hope, not just to the remaining Native American population, but to all who confront the forces of colonialism.

To borrow the words of American journalist Chris Hedges: "There are few resistance figures in American history as noble as Crazy Horse. His ferocity of spirit remains a guiding light for all who seek lives of defiance."

(By the way - that Crazy Horse Memorial is still under construction, in the Black Hills of South Dakota!)