History gives us many examples of cities which have shown a special talent for producing radical politics.

'Rote Wien' (Red Vienna) was known as a socialist stronghold between the wars until the Nazis marched in. Then there's Paris, with a new revolution or commune every other decade.

Madrid - the beating heart of the Spanish Republic - was so left-wing during the civil war that suits were outlawed for being a sign of the bourgeoisie.

And I'm starting to realise there's another name for this radical cities list - Chicago.

As I research more of our US designs, old and new, the name keeps coming up.

Chicago was where the Republicans (back when they weren't the bad guys…) nominated Abraham Lincoln for the Presidency in 1860.

The Haymarket Affair of 1886 - when eight US anarchists were convicted on false charges - takes its name from Chicago's Haymarket Square, where the labour demonstration at the start of the ordeal took place.

And Emma Goldman spent a fair bit of her time agitating in the city. She's actually buried in Forest Home Cemetery on the western outskirts.

It turns out that Chicago has yet more in its trophy cabinet. Jane Addams - born today in 1860, the year of Lincoln's election - made her radical name in the diverse, working-class streets of the city's 19th ward. 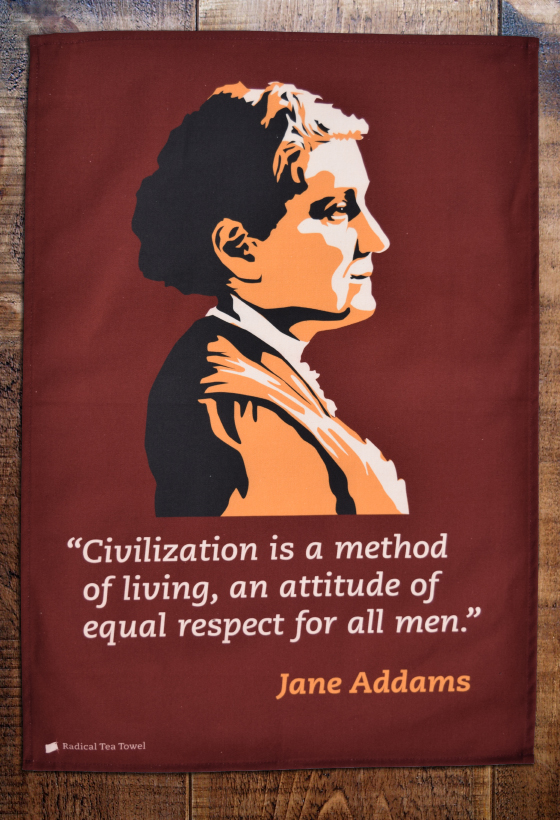 View the Jane Addams tea towel on our site

A radical in the making

Like Goldman, Jane Addams didn't actually come from the city itself. On the 6th September 1860 she was born into a wealthy but liberal-minded family in Cedarville, rural Illinois.

It fast became clear that Jane wasn't to follow her father, John, into big business agriculture. Wide reading, not least of Charles Dickens, had fired up in this young American girl a will to fight society's ills.

All that remained was to determine what form her fight would take.

In December 1887, Jane set out on a trip to Europe and, while in London, she visited an extraordinary place called 'Toynbee Hall'.

Burrowed in the proletarian depths of Victorian-era Tower Hamlets, Toynbee Hall was the flagship institution of the contemporary 'Settlement Movement'.

Conceived by typically middle-class social reformers, this movement sought to reduce the gap between rich and poor at a time when capitalism had made it wider than ever.

Places like Toynbee Hall sought to achieve this by researching social problems, providing services like education and food relief to the local poor, and physically bringing the classes together, with their middle-class 'settlers' living as part of the working-class community where they worked.

Inspired by her experience in London, Jane returned to the US determined to set up something along the lines of Toynbee Hall in Chicago. In 1889, she founded ' Hull House' with her friend (and lover), Ellen Gates Starr.

Situated on the Near West Side of the city, Hull House would be a pioneering institution of social reform for decades, not just in Chicago and Illinois, but across the US (and the world - future Canadian Prime Minister, William Mackenzie King, would visit the place).

Under Addams's leadership, Hull House encouraged interaction among the neighbourhood's different ethnic groups, it investigated the connection between economic poverty and diseases like typhus, and it promoted protection and recreation for children trying to grow up in a heavily industrial city.

Addams was particularly keen on encouraging artistic expression in the House's neighbourhood, both as a means of creative self-development and to vent the heavy frustrations of working class life in contemporary Chicago.

Addams' Impact on society was way beyond her time

These policies and their underlying concern for the social problems of working class America were decades ahead of the government.

(Literally decades - it wasn't until the 1930s that a US government under Franklin Delano Roosevelt would show anything like Jane Addams' urge to combat poverty and economic inequality.)

Jane well and truly lived out her creed that the only hope humanity ever had was "faith in new possibilities and courage to advocate them."

Clearly, then, we have yet another first-rate radical from Chicago on our hands in Jane Addams.

I'm told that one of the city's nicknames is, simply, 'My Kind of Town'. With a political lineage like this, I'm inclined to agree.

View the Jane Addams tea towel on our site
×