Born today in 1855, Eugene Debs belongs to a proud history of American socialism which is only now being rediscovered.

Last month, Matt (Radical Tea Towel’s strategist-in-chief) was travelling through the Balkans when he stopped off at the Museum of Yugoslavia in Belgrade.

He came across an old German poster. It was titled “The Family Tree of Socialism”.

Created around the turn of the 20th century, this radical family tree mapped the long and winding story of the ideas which made up modern socialist thought, from their ancient roots in the Levellers of 17th century England, all the way up to contemporary firebrands like Marx and Engels.

The point is, our progressive ideas have a history. And uncovering that history is essential if we want to see those ideas realized - whether in the industrial era, or in this age of internet neoliberalism we're all trying to figure out now.

But don't take just my word for it.

“That Old Man with the Burning Eyes”: Eugene Debs and the Spirit of Socialism

Bernie Sanders, America's most famous modern socialist, has always been passionate and vocal about the heritage of his democratic socialist politics – and about one historical figure in particular.

That would be one Eugene Debs.

Why? He was the founding force of socialism in the United States. 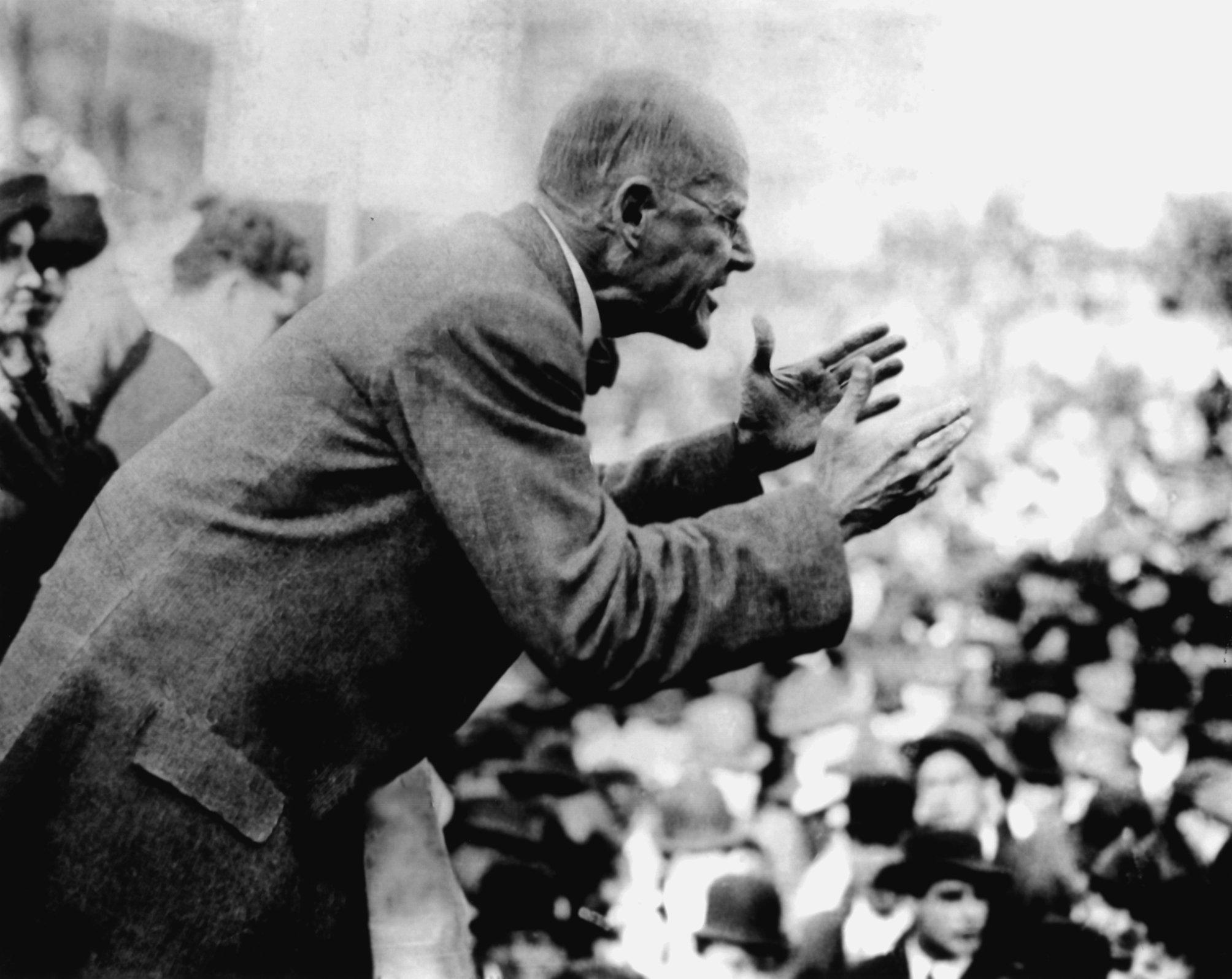 Debs in front of a Bernie-sized crowd in Ohio, 1918

Where Germany had Karl Marx and Britain had James Keir Hardie, America had Eugene Debs.

The first leader of the Socialist Party of America, Sanders remembers him as “probably the most effective and popular leader that the American working class has ever had.”

Eugene Debs came into party politics out of America’s defiant late-19th century trade union movement, where he’d led the American Railway Union from its base in the radical stronghold of Chicago in its great 1894 strike against the bosses of the Pullman Palace Car Company.

Thrown in jail for his part in all this by a rabidly anti-worker government, Debs, in his own words “caught the spirit of socialism.”

While behind bars he devoured socialist literature, emerging in 1895 intent on forming a socialist political party in the USA like the ones which were beginning to succeed and win power in Europe.

Over the next thirty years, Debs ran for president four times (the last one from jail again, after he and other socialist leaders were arrested for speaking out against Woodrow Wilson’s entry into WWI).

Now, cup your hand to your ear and you’ll hear the many echoes of Eugene Debs in Bernie Sanders: the socialism, the intolerance for injustice, the dream of a better world.

Biographically, both Debs and Bernie were the sons of immigrants (French on the one hand, Polish and Russian on the other), and both came into their political prime later in life.

But there is at least one limit to the similarities.

From Debs to Bernie to AOC

Where Debs died (in 1926) with socialism in the United States brutally repressed and marginalized by a sinister pairing of government and big business, Sanders and his friends are hoping to lead its renaissance.

One beautiful eulogy of Debs spoke of how:

“That old man with the burning eyes actually believed that there can be such a thing as the brotherhood of man. And that’s not the funniest part of it. As long as he was around I believed it myself.”

A century later, those who see the world as Debs did still have a lot to keep fighting for.