One of our newer tea towel characters is Abraham Lincoln.

We chose him for what he has come to symbolise – the abolition of slavery in 19th century America.

As President, Lincoln's commitment to this goal culminated in the 13th Amendment to the US Constitution, which was passed by US politicians 153 years ago today in 1865. The amendment effectively outlawed slavery forever.

But there were abolitionist forces in America way more radical than Lincoln. 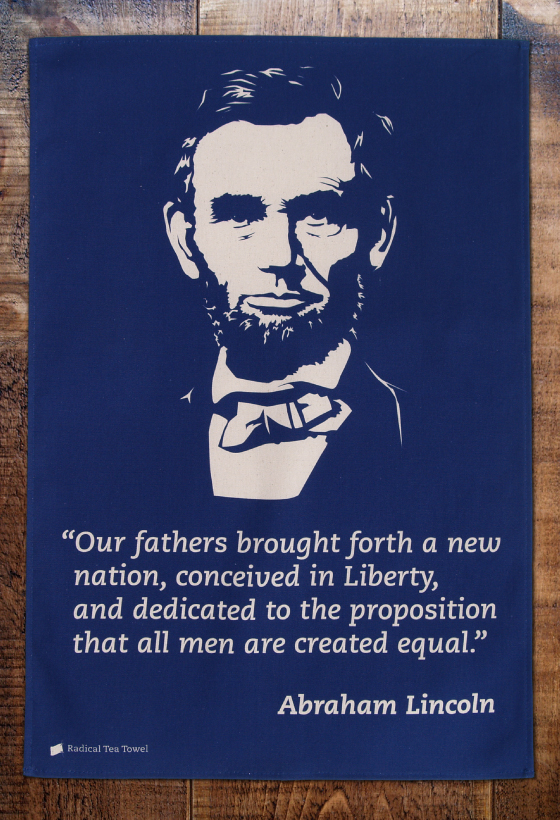 The activism of less famous men and women, both free and enslaved, was essential to pushing through the 13th Amendment and other anti-slavery measures in the 1860s.

This is where a Pennsylvania lawyer called Thaddeus Stevens enters our story.

During the American Civil War (1861-65) Stevens was the leader of the Radical wing of Lincoln's Republican Party. Yes - the Republican Party. This was back in the days when the Democrats were very much the reactionary force in US politics.

Stevens tirelessly hounded his party's leadership to hold to the progressive values they claimed to espouse.

He was opposed to gradualist approaches to abolition.

For example, Stevens denounced the support Lincoln had voiced for settling freed slaves in foreign colonies like Liberia in West Africa. He believed it gave up on the notion of a non-racial American citizenship for which the war was being fought.

Later, as it became clear that the North was going to win, Stevens never stopped demanding a radical form of 'Reconstruction' (i.e. dealing with the defeated slavery-supporting Southern states).

He called for the South to be treated as a conquered territory: land should be transferred from former plantation owners to their freed slaves and whites should only be allowed to vote if they had taken an oath of loyalty to the now slavery-free Republic.

Stevens pushed this image of a new, racially equal America against more conservative visions of Reconstruction which were softer on the racist values of the Confederacy.

This conservatism was supercharged by the April 1865 assassination of Lincoln, who had been quite sympathetic to some of the Radicals' ideas.

Stevens fought to prevent the freedoms won by the sacrifice of millions of black slaves and Union soldiers from being undermined by spineless compromises.

But despite this lifetime commitment to absolute racial equality, Thaddeus Stevens and other Republican Radical names like Charles Sumner and Galusha Grow have been forgotten by most.

Perhaps we're contributing to this by putting Lincoln on our tea towel and not Stevens.

On the other hand, we have to deal with historical symbols as they are, not always as perhaps they should be.

If we want to champion the value of human emancipation against its opposite, Lincoln is – for now at least – one of its most recognised personifications.

Nevertheless, we'd all do well to remember those like old Thaddeus Stevens who didn't achieve celebrity status in the narrative of abolition.

He reminds us that slavery was not overcome exclusively, or even primarily, by moderates. The story of abolition doesn't make sense without dyed-in-the-wool radicals who didn't speak the language of 'ifs' and 'buts' when it came to the basic equality of all people.


Remembering those that fought for basic equality

On this anniversary of the 13th Amendment, let's take a moment to remember the forgotten heroes of abolition in America. Men and women like Thaddeus Stevens.

And of course, the countless slaves and former slaves who fought against the tyranny of the age, and those who fought for equality and civil rights past then.

(Do you think I'm being too harsh on Lincoln – was he more radical than I'm giving him credit for? Would love to hear your thoughts in the comment section of this post. Also, let us know about any other less well-known figures in the abolition movement that deserve a mention!)