Alice Paul was key to the campaign for women's enfranchisement in the US. Sadly, she abandoned other groups pursuing freedom along the way.

Confusingly, she stands before us in American history as both an inspiration to follow and an example to avoid.

On the one hand, there are few in modern times who have demonstrated such total commitment to the achievement of justice.

Paul's lessons from the WSPU

After graduating with an MA in political science from the University of Pennsylvania, Alice went to the UK. While there, she heard leading suffragette Christabel Pankhurst speak at a rally in Birmingham, England - this, along with the influence of her mom, Tacie, was a key moment in the development of Alice's feminism.

From this moment, she committed herself completely to securing votes for women.

Alice joined Britain's Women's Social and Political Union (WSPU) and began to play a big role in its agitation for an equal franchise.

This included, among other things, hurling a shoe at the British Prime Minister, Herbert Asquith, in 1909.

Alice was arrested three times for her WSPU activism. On all three occasions she took the suffragette strategy of going on hunger strike for the status of 'political prisoner'.

On the third occasion, she, like many of her sisters, suffered force-feeding (i.e. torture), at the hands of her jailers. She contracted gastritis, which would continue to affect her health for the rest of her life.

The fight for the 19th Amendment

After these ordeals, Alice returned to the US - both to recover, and to carry her struggle for enfranchisement into American politics.

She immediately began working for the National American Woman Suffrage Association (NAWSA), brushing shoulders with other icons of progressive politics like the labor lawyer Inez Milholland, andJane Addams of Chicago.

Drawing on her experience in Britain, where suffragism was operating on a nationwide level, Alice Paul recommended NAWSA start doing the same. She wanted it to begin pushing for an amendment to the US Constitution.

Alice had to push through plenty of resistance to this strategy, but it won out.

She was the one who organized the now iconic ' Woman Suffrage Procession' of almost 8,000 marchers in Washington D.C. on 3rd March 1913. 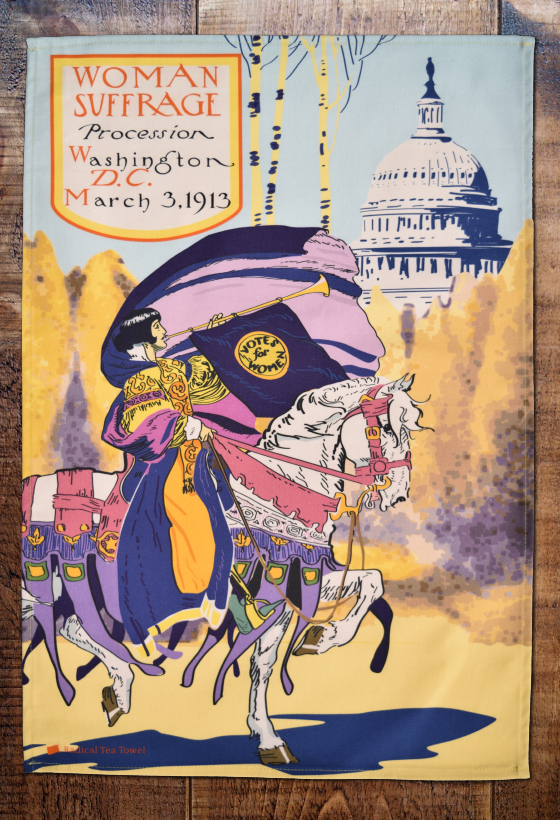 Suffrage Procession design back in stock - and a new wash bag!

The processions was timed for the day before Woodrow Wilson's inauguration as President - a Democrat who'd yet to commit to supporting a franchise amendment - and it took the same route which he would to the Capitol building.

Paul had had to overcome endless obstructions by city officials, and on the day dealt with police who were ignoring their orders to protect the march from anti-feminist disruptors.

But the procession was an important milestone for US suffrage, marking the moment when the old state-by-state strategy was ditched for Alice Paul's federal approach - which would eventually win the 19th Amendment in 1920.

In many ways, Washington was the peak of her virtue as a radical campaigner of early twentieth century feminism; but it also exposed her greatest flaw.

The flaw in Paul's fight

African-American feminists like Ida B. Wells resisted the efforts of Paul and others to exclude them, but the damage to her historical reputation had been done.

By fighting for a segregated procession in 1913, she set out her stall with those white women whom Sojourner Truth had called out back in 1851 for demanding their own equality while throwing equality for black women and men under the bus.

It might have been that Alice Paul thought she was making a tactical choice - white men would more likely give white women the vote if they did not associate with advocates for racial equality - or she might have simply held condemnable, racist views herself.

But whatever her reasoning or prejudice, Paul had failed to appreciate the universal truth that no oppressed group is truly fighting for emancipation if it liberates itself while leaving others in their chains.

Though it's no excuse, Alice Paul is far from alone in failing to appreciate this fact.

Marx, for example, so deeply focused on the cause of the proletariat in Europe, at times dismissed colonial resistance to European imperialism further afield.

Emmeline Pankhurst infamously jumped in behind First World War militarism to win backing from the British establishment for female enfranchisement.

And Gandhi, while agitating against anti-Indian racism as a young man in South Africa, neglected to stand in solidarity with black South Africans in their same fight.

Don't dismiss those who fought for justice, even if they were flawed

When it comes to Alice Paul, then, we can't reflect on her in one way alone. It's not a matter of celebration or condemnation, imitation or avoidance.

Condemn, unequivocally, her racist hostility to the inclusion of African-American women in the US suffrage movement - and avoid her failure to appreciate that one group cannot be liberated until all are.

But I'm not certain we can throw her in with the villains of history, lock, stock, and barrel.

In a world teeming with people either eager to oppress or happy to sit back and let that happen, Alice Paul took a stand and fought fiercely for what she saw as emancipation.

Her vision was sadly only partial, and this failure led her to take the side of reaction on key questions.

Revolutionary but misguided, imperfect yet brave - Alice Paul is one icon of Women's Liberation we can perhaps all relate to, in some way, and learn from.