As opportunistic politicians and xenophobic media outlets continue to scapegoat and demonize those who have lost everything we take for granted, it's worth taking a moment to reflect on what it means to be a refugee – and what it means to stand with our human brothers and sisters.

It was created by the  UN General Assembly in 2001 as a way to promote support for refugees globally. 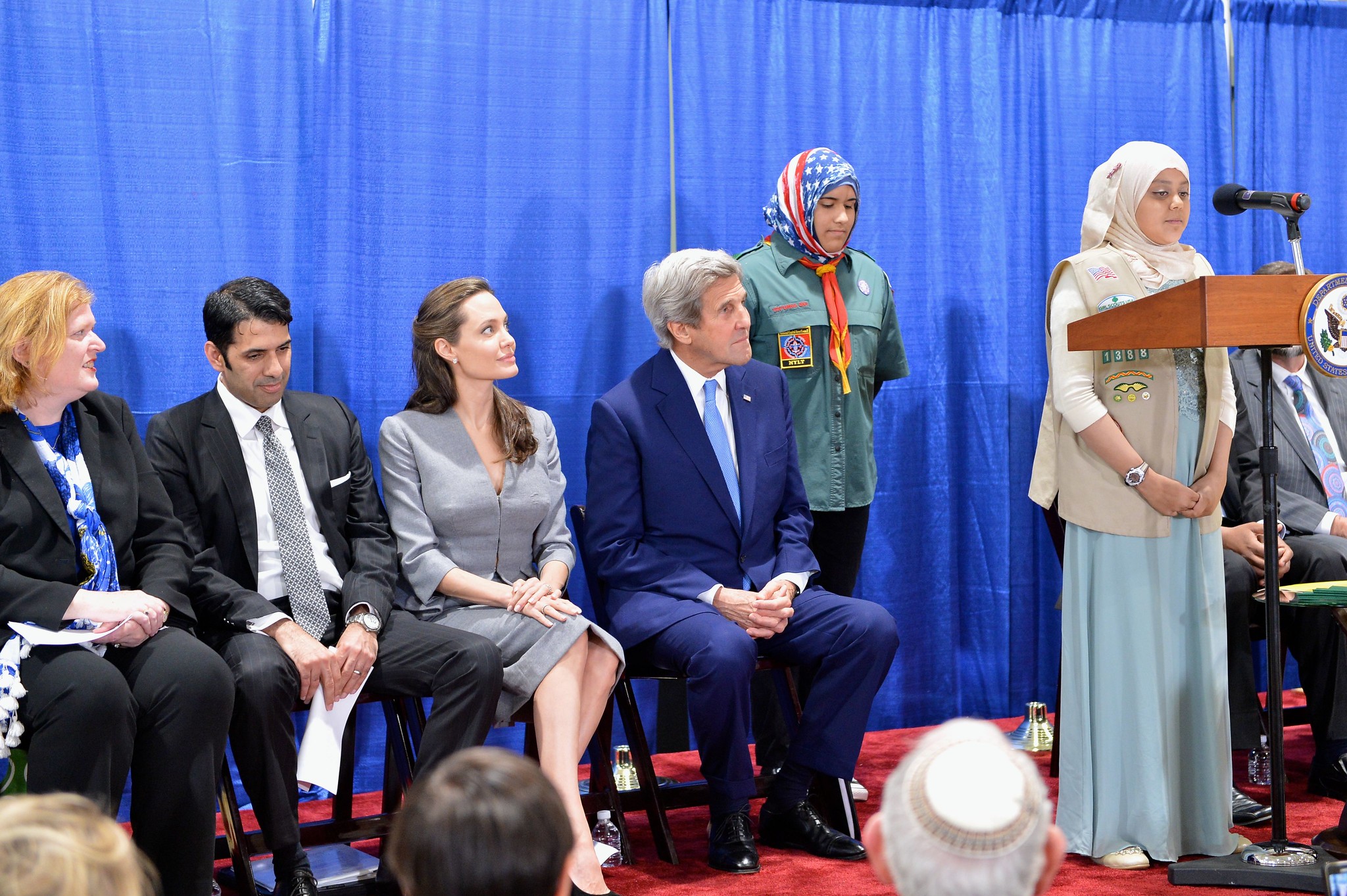 Above: A local girl scout addresses the audience at an interfaith reception to mark World Refugee Day during the Obama Administration

At a time when the conversation around words like "refugee" and "migrant" has been poisoned by xenophobia and political opportunism of the worst degree, with this post I wanted to do what I can to help change the conversation.

But how? What’s the best way to go about promoting the cause of our sisters and brothers fleeing war, famine, and other conditions none of us would wish on our ourselves?

Maybe it’s by pointing to the sheer number of them without whom humanity wouldn’t have achieved half as much as it has.


The Refugee Hall of Fame

Albert Einstein himself was a refugee, driven out of his German homeland for being Jewish.

And  Ghassan Kanafani, one of the biggest figures in the history of modern Palestinian literature, spent most of his life as a refugee, forced from his native Acre by Israeli soldiers when he was just a little kid.

Perhaps people can be persuaded to welcome refugees today by the celebrity and legend of refugees from the past.

But this feels not quite right – surely humans fleeing one place for the shelter and security of another shouldn’t need to have revolutionised theoretical Physics or done some other world-changing feat just so that they can be shown a proper degree of respect and compassion.

Surely “do unto others as you would have them do unto you” – that basic moral rule which runs through so many systems of thought, religious and secular – must be enough for us to welcome the newcomers who land in our societies.

Especially when we consider that more or less all of us are descended from refugees at some point.

The white settlers who began landing in North America over the 17th century were oftentimes blown across the ocean as much by religious persecution in Europe as the Atlantic sea winds.

Nor are the Irish strangers to being refugees. Over the centuries the sons and daughters of the Emerald Isle have been driven away to all four corners of the world by everything from Oliver Cromwell’s bayonets to the Potato Famine.

And, if Geoffrey of Monmouth’s 1136 Historia Regum Britanniae (‘History of the Kings of Britain’) is to be believed, even the ancient Britons – who lived in the British isles well before the Romans or the Saxons or the Angles arrived – were themselves thought to be refugees from the fall of Troy!

The point is, it’s a bit rich (to say the least) for the Western descendants of refugees to sneer at and turn away the refugees of today.

And this is before we even get to the fact that it’s often our governments which have created the cause of these refugees’ displacement.


“Send these, the homeless, tempest-tost to me”

Just look at  Latin America, where the US state has long propped up dictators who terrorise their own people, driving them from their homes and villages, only to arrive at the US border to be met by President Trump’s barricades and barbed wire.

Refugees have lost everything we take for granted, and through no fault of their own – often, actually, through the direct fault of our governments. So, they shouldn’t have to jump through hoops to be given asylum and a place to live.

Welcoming refugees into the safety we are able to enjoy in Europe and North America thanks only to the lottery of birth is both our duty and honor as members of the human family.

In these times of deceit and untruths, when innocent refugee families are so often scapegoated and demonised by politicians and media barons who are themselves as close to demons as human beings can get, we must be loud and proud in showing them our support and friendship.

Over the years, we’ve done what we can at Radical Tea Towel to raise awareness and funds for charities like  Medical Aid for Palestinians (MAP), which supports essential medical care in the Palestinian refugee camps.

And we continue to donate £1 to  Refugee Action for every purchase of our tea towel inspired by the 19th century Jewish-American poet Emma Lazarus: 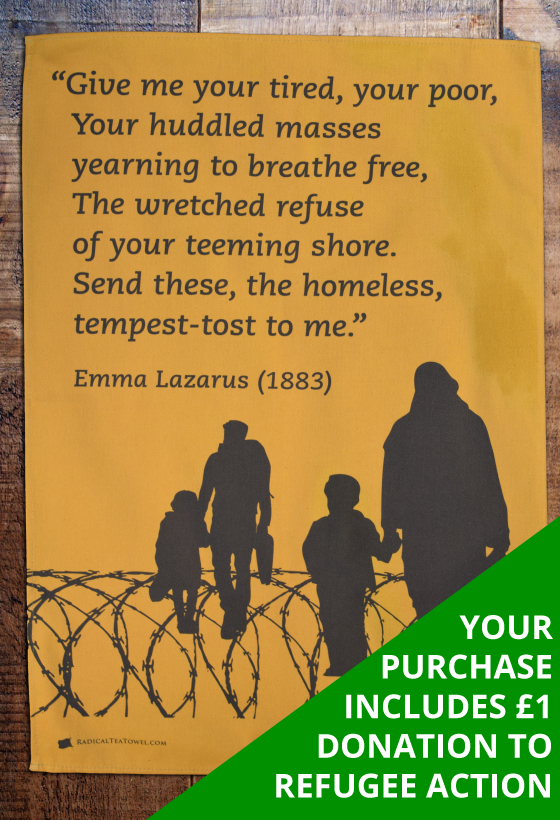 On that tea towel design are the immortal words which Lazarus, moved to tears by the plight of Russian Jews fleeing the Tsar's pogroms, wrote in 1883:

“Give me your tired, your poor,

The wretched refuse of your teeming shore.

Send these, the homeless, tempest-tost to me.”

These lines were later engraved into the pedestal of the Statue of Liberty – a symbol of welcome to those in need.

Hopefully one day they’ll be engraved on every border post and above every threshold in the world.

The struggle goes on.