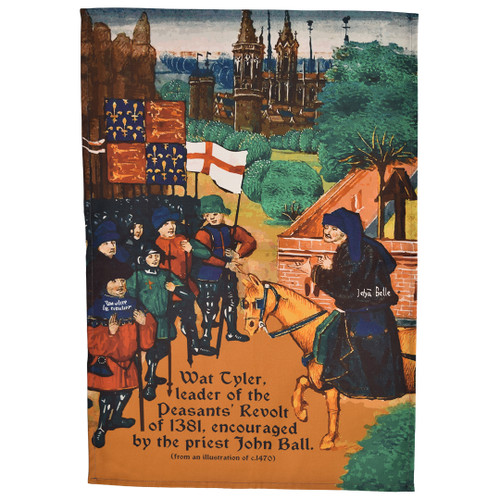 By 1381, some 35 years after the Black Death had swept through Europe, slaughtering over one third of the population, there was a shortage of people left to work the land. The surviving peasants began to revaluate their worth, demanding higher wages and better working conditions. Unsurprisingly, landowning Bishops and Lords weren’t receptive to this. The boiling pot of rebellion simmered.

Then, an extra tax was introduced – extra revenue was required to support the drawn out the conflict with France during the Hundred Years' War. This was the third time in four years that such a tax had been applied. Everyone over the age of 15 had to pay one shilling or the material equivalent. It was a steep demand. The pot bubbled.

In May 1381, a tax collector arrived in the Essex village of Fobbing to find out why the people there had not paid their poll tax. The villagers threw him out. When soldiers were sent out to establish law and order, the villagers fought back. The pot boiled over.

The violent confrontation rapidly spread across the south-east of the country, with more than 60,000 thought to be part of the revolt. They began marching to London, with Wat Tyler emerging as the natural leader. Under his leadership, the rebels sought a reduction in taxation, an end to the system of serfdom and the removal of the King's senior officials and law courts.

In the centuries since, the revolt has been widely used in socialist literature, including by the author and interior designer, William Morris, and remains a potent political symbol for the radical left, informing the arguments surrounding the introduction of the Poll Tax in the UK during the 1980s.

Our new tea towel is inspired by an illumination by an unknown artist. It depicts John Ball, a priest who believed that all people should be equal, encouraging the rebels.