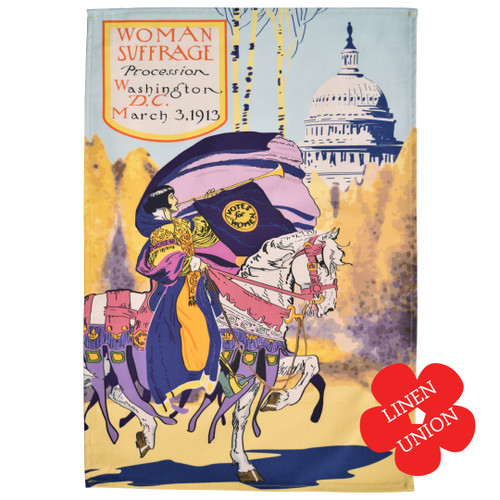 The artwork on this radical tea towel captures an inspiring moment of feminist history: the ‘Woman’s Suffrage Procession’, the first suffragist parade in Washington, D.C., organised by suffragist Alice Paul. On March 3rd, 1913, the day before President Woodrow Wilson's inauguration, thousands of suffragists marched down Pennsylvania Avenue ‘in a spirit of protest against the present political organisation of society, from which women are excluded.’ A century and a bit later, in a worldwide Women's March on January 21st, 2017 (in the face of another presidential inauguration) feminists in all seven continents took to the streets again, this time in their millions. They, too, marched for women’s rights over their bodies, over their narratives, over their humanity. Onwards we march!